Lady Flames sink the Midshipwomen on their home ice, 12-0 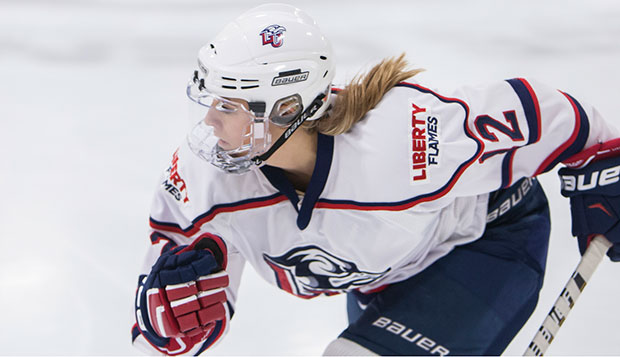 "The girls came out of the chute slow," Lady Flames Head Coach Paul Bloomfield said, noting they only scored three goals in the first period before netting six in the second. "We were outplaying them, but just weren't putting them in the net. Once they figured out where the puck was supposed to go, the girls got it turned loose."

Graham got her hat trick by scoring three of the Lady Flames' first four goals in the second period, the first off a solo assist from Stevenson at the 18:27 mark. After junior defenseman Brittany Hymers made it 5-0 by converting off assists from Tipping and Grainger with 14:02 left, Graham netted her second and third scores by finishing feeds from both MacArthur and Stevenson at 8:06 and 3:52.

Then, with one second to play in the period, Catherine Burrell scored off an assist from fellow junior forward Carrie Jickling for a 9-0 advantage heading into the third period, when Liberty added three more goals.

"The second period, the girls figured it out and just came out and played hockey," Bloomfield said. "It was Olympic-sized ice, or even bigger, and the girls weren't used to playing on it, but they played their positions really well and they were passing and cycling and their passes were right on the tape and (Navy's) players couldn't touch them."

Senior forward Stephanie St. Amand started the third-period scoring with 10:49 to play on assists from sophomore forward Nicole Douglas and junior forward Sarah Fowler before Jickling netted the last two, both assisted by Burrell. Stevenson had the secondary assist on the second, the game's only power play goal.

Bloomfield was expecting a better test after the University of Massachusetts, ranked second in the preseason ACHA DI coaches' poll, only beat Navy, 2-1, after the Lady Flames, ranked third, swept the Minutewomen, 4-1 and 5-1 on Oct. 3 and 4.

He used Saturday's game as preparation for next Friday's and Saturday's games at Robert Morris (Ill.) in Chicago, and hopes to do the same in Sunday's rematch at 10 a.m., when freshman Rose Kelly will get her second start in goal.