Flames regroup to tie Panthers before falling in a shootout 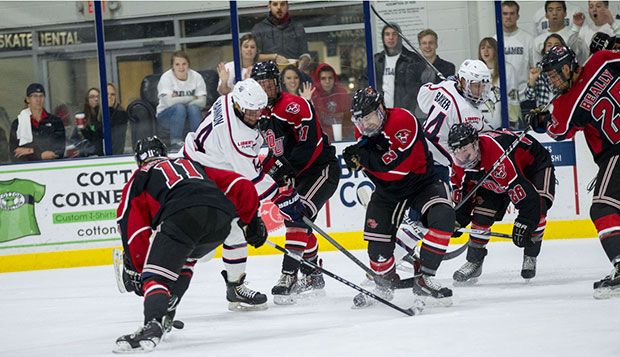 Battling in the first game of the third annual best-of-three Blue & Gray Cup, the ninth-ranked Liberty University ACHA Division I men's hockey team found itself in a 3-0 hole at the end of the first period against No. 14 Davenport.

The Flames (7-1-4) shuffled up their lineup before digging out of the early deficit to force overtime only to fall in a shootout for the fourth time in as many tries, 4-3, Friday night at the LaHaye Ice Center.

Liberty came into the game on a three-game losing streak, including shootout losses in the second game against Arizona on Oct. 4 and in the opener last Saturday at Minot State.

"We've been through a real testing time," Flames Head Coach Kirk Handy said. "It's nothing to hang our heads about. Our team has got a will to win and it's still there. We had chances not only to tie the game up but to win the game, too, (but) couldn't take advantage of them."

Davenport forward Matt Ogden started the scoring with 16:50 left in the first period when he maneuvered the puck in front of Liberty freshman forward Luke Simon just inside the blue line and launched a wrist shot through traffic past sophomore goalie Ian Harris, a Division III call-up making his second straight start in goal in place of injured sophomore Matt Pinel and freshman Josh Halpenny.

Less than 50 seconds later, Panthers sophomore forward Jordan Simmonds had his shot from about the same spot deflected off a stick and Harris could only watch it trickle into the back of the net.

Freshman forward Everett Thompson extended Davenport's advantage to 3-0 with just 22 seconds left in the opening period by chipping in the rebound of a shot on goal by senior Josh Munford that landed in the goal mouth.

"We started slow, we started tentative in the first period and they were able to take advantage of that and put three on the board in the first period," Handy said. "After that, I was proud of our guys and the effort they showed battling back in the game, and really creating an opportunity to win the game, which is key for us."

Senior goalie Cary Byron, who started in goal for Liberty's Division II team in a win over Virginia Tech earlier in the afternoon, replaced Harris to start the second period. He came up with some spectacular saves, including a few in the final minutes of regulation and the five-minute overtime.

"Cary played well," Handy said. "I thought we kind of let Harris down in the first period, left him out to dry. But we shook up the lines and we changed the goalie to try to get some momentum going back our way."

The Flames finally got on the scoreboard by capitalizing on a fast-break counterattack midway through the second period, when junior forward Bram Erickson put away a short cross from junior forward Tyson Street, who took a hit to the head as he released the puck near the left post.

Two goals in a span of just over three minutes early in the third period got the Flames back in the game, and they wound up outshooting the Panthers 34-33 on the night.

First, with 18:37 remaining in regulation, freshman forward Paul Lamoureux won a faceoff in the offensive end back to senior defenseman and captain Matt Sherry, who sent the puck along the boards in the left corner. Freshman forward Luke Hannon gathered it and sent it to Simon in front of the net, where he flicked it to Lamoureux in the left crease for the finish, trimming the Panthers' edge to 3-2.

"It was a good play," Handy said. "We put that line together and Lamoureux and Simon played well together."

Then, with 15:28 to go, moments after having his point-blank shot blocked by Davenport goalie Matt Kaludis, Hannon sent a cross from the left to right crease where Simon shoveled his shot into the net for the tying score.

Davenport defenseman Cody Walsh got the game winner in the first round of the shootout. Walsh swept wide to the left, drawing Byron out, before cutting back and faking a slapshot from center and lifting the puck top-shelf from the right side.

The puck drops at 7 p.m. for Saturday's rematch at LaHaye, where Davenport (3-1-1) could clinch its second Blue & Gray Cup with a win.