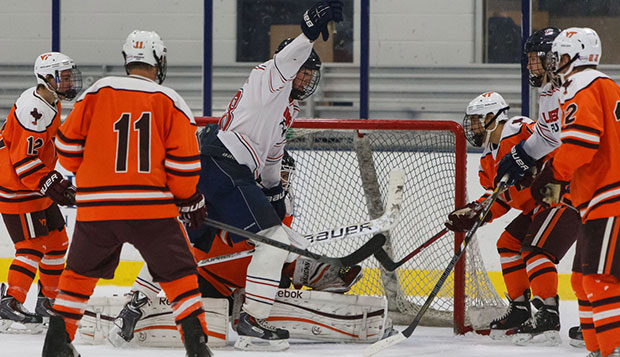 After blanking the Hokies 4-0 in the first round of last Friday's DII showcase at the LaHaye Ice Center, Flames junior forward Paul Ingles netted two goals in Thursday night's 5-0 rout in the Roanoke Civic Center before converting a hat trick in Friday afternoon's rematch back at Liberty, a 6-1 triumph.

"Overall, the guys executed," Flames Head Coach Chris Lowes said. "(Ingles') line scored four goals again today. When his line's playing like they are producing, if we can play even in the other lineup matchups, we're going to be pretty good."

Ingles now ranks seventh in ACHA DII in scoring with 11 goals and 11 assists while Freymond is not far behind with seven goals and eight assists.

"He's always been a hard worker and a great defensive centerman," Lowes said of Ingles. "The evolution of his game has really seen the execution and the finish that we're seeing this year. So that's really exciting, the fact that he's (becoming) a more complete player (and) making the most of his opportunities."

Senior goalies Justin Gortman and Cary Byron split the shutout on Thursday night before Byron played the entire game between the pipes on Friday, allowing just one goal late in the first period after the Flames had seized a 4-0 lead.

"The real positive is one goal against over three games," Lowes said. "That's something we really preach and when you get into playoff games, we need to be able to have a strong defensive game and limit chances by the other team. The defense is doing a lot better in eliminating turnovers, reading the play, and making good outlets."

The rare three-game sweep of the Hokies (3-6-1) not only clinches the inaugural Battle of the Blue Ridge Cup, but should give the Flames (11-3) momentum heading into next Friday and Saturday nights' series at Florida Gulf Coast, which defeated Liberty 6-1 in the last game of the DII showcase on Sunday.

"In all my years of coaching, neither one of us have been able to sweep a regular-season series," Lowes said of the rivalry between him and Virginia Tech coach Joey Mullen. "We've been consistently splitting for the past several seasons. It's a big deal for our guys, as a pride thing and for the series rivalry, and also it will go a long way to helping us in our goal of a high ranking. Tech is a perennial top-10 team. They're having a bit of trouble here this year, but I expect them to battle back and be a regional contender by the end of the year. The fact we were able to get these wins will go a long way to helping us."