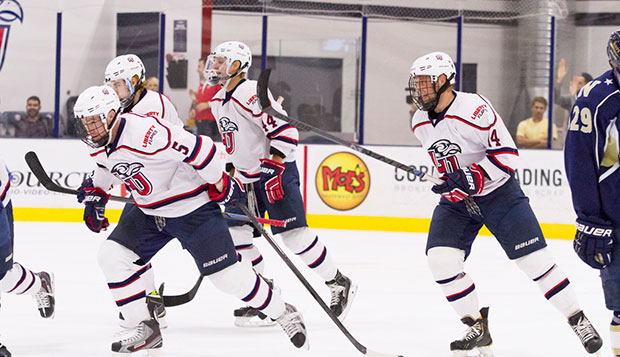 Freshmen defenseman Ben Hughes (5) and forward Luke Hannon (14) were named alternate captains prior to this Friday and Saturday night's games against Davenport at the LaHaye Ice Center.

The Flames return to the LaHaye Ice Center to take on Davenport University this Friday and Saturday nights in the first two games of the third-annual, best-of-three Blue & Gray Cup, and last two home games before a five-game road swing to Arizona and West Virginia.

Liberty dropped one spot to No. 9 in this week's ACHA DI poll while the Panthers moved up two places into a tie with Navy at No. 14.

Last season, the battle between the teams representing Civil War regiments based in Lynchburg, Va., and Grand Rapids, Mich., turned brutal. After surviving the opener, 2-1, several players from both sides of the Mason-Dixon line were ejected following a skirmish involving all 12 players on the ice in the second game at Liberty, which the Flames held on to win, 3-2.

The Flames won two out of three meetings with the Panthers last season to claim the Blue & Gray Cup, won by Davenport in 2012, the Cup's inaugural year. If the teams should split this weekend's series, the duel for the Cup will be determined when they meet Nov. 20 at Davenport.

Friday night's first game will also be the first-ever Whiteout Night for Liberty Hockey, with fans wearing a white shirt, or purchasing one in the Pro Shop, receiving a $2 discount off their ticket price.

Liberty Scouting Report: In their first road game of the season, at 2013 ACHA DI national champion Minot State, the Flames endured their third shootout loss in three ACHA series played. For the second game in a row, Liberty wasted a 5-2 third-period lead in a6-5 defeat, this time to the sixth-ranked Beavers. The next day, the Flames opened a 2-0 advantage in the rematch before allowing four unanswered goals in a 4-2 defeat, their first regulation setback of the season.

Offensively, 20 players have scored at least one point for Liberty, including five contributing 10 or more — Hannon, LeBlanc, freshman forward Luke Simon (8G, 6A), senior forward Ryley Egan (4G, 9A), and Sherry (5G, 5A). Senior defenseman  Cam Bakker (3G, 6A), sophomore forward Grant Garvin (5G, 3A), and junior forward Bram Erickson (3G, 5A) are not far behind.

In goal, Liberty has leaned on sophomore Matt Pinel (3-0-3, 90.6 save percentage, 2.78 goals-against average), who has posted two shutouts, but also suffered all three of the shootout losses. Freshman Josh Halpenny (2-0, 96.4 SP, 0.80 GAA) has missed the past four games due to an injury sustained while giving up his first goal of the season in the second game against Navy, after going unscored upon for his first 120 minutes in the cage.

Davenport Scouting Report: Through four games, Luke McCarthy is the Panthers' top scorer with six goals and two assists, including five goals and one assist in a sweep of John Carroll on its home ice near Cleveland, site of this year's ACHA DI National Championships. Jordan Simmonds contributed three goals and two assists in that series.

Former Liberty goalie Clayton Brown, who won 24 games for the Flames in two seasons including going 10-1-2 as a sophomore in 2013, is now a senior at Davenport. Brown made 23 saves in recording a shutout in his only start this season against John Carroll. The Panthers' top net-minder is Matt Kaludis, who has posted a 2.59 goals-against average and a 97.7 save percentage in three starts.

All-time series: Liberty is 17-16-1 against Davenport in a series that dates back to the 2005 ACHA DII National Championships.

In 2006, the two teams met five times in a span of one month, capped by an overtime victory by the Flames in the DII national semifinals. Liberty lost to Oakland in the championship game before both teams moved up to ACHA DI the next year, when Oakland won its first DI national title and Davenport advanced to the ACHA DII championship game, losing to Michigan State. The Panthers went on to claim the next three ACHA DII titles before making their move to ACHA DI in 2010 and immediately capturing the DI national crown by defeating two-time defending champion Lindenwood.

The Flames and Panthers squared off a total of seven times in 2011-12 and 2012-13 with the visiting team winning all seven contests. Last season, the home team won all three matchups.

Coaches: Handy is in his 15th season as the Flames' head coach, with an overall record of 315-129-18. Phil Sweeney is in his fourth season as head coach after serving as an assistant for the previous six seasons. His record at the helm is 78-44-5.