Eagles soar past Flames in finale of DII showcase at LaHaye 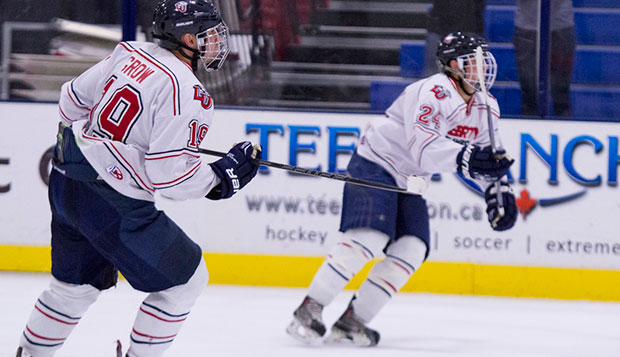 The Flames lost for the third time in four games, 6-1, to the Eagles (3-0), the runner-up in last season's ACHA Division II national championships who opened their season with a weekend sweep of Miami of Ohio, Virginia Tech, and Liberty.

"It was a good weekend of hockey," Flames Head Coach Chris Lowes said. "We were glad to have the teams in. There was a lot of talent. Unfortunately, we came out on the wrong end of two of the games."

The Eagles netted three first-period goals before Liberty ended the shutout with 1:28 left in the opening stanza when Ben Freymond scored off assists from fellow sophomore forward Devon Docksteader and senior Jackson Kuhn.

"I felt a lot better about our performance tonight than I did last night," Lowes said. "They just exposed us. We gave them a couple odd-man rushes and everything went in. They scored two shorthanded goals, a few odd-man rushes and you can't recover from that."

After Nick Schilson scored the only goal of the second period off an assist from Dillon Duprey, extending FGCU's edge to 4-1, Docksteader and Freymond had a couple near misses around the Eagles' nest, with Docksteader hitting the post off a pass from the right corner and goalie Mike Reed denying Freymond from point-blank range.

"If we could have buried a couple there in the second, we would have been right back in it," Lowes said. "Instead they got a couple shorties there that put the game out of reach."

With Liberty on a power play, Dan Echeverri and Duprey capitalized on counterattacks midway through the third period for FGCU's final two scores.

"We had some very good stretches in the game, but that's the problem," Lowes said. "If you play 40 or 45 minutes and make those mistakes, a team like this will make you pay."

Liberty has a short week to prepare for its next two outings, the second and third games in the inaugural "Battle of the Blue Ridge", a best-of-three series with the Hokies, Thursday night at the Roanoke Civic Center and Friday at 2:30 p.m. back at LaHaye.