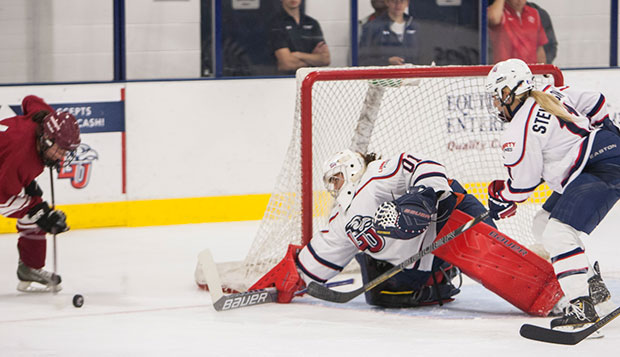 Backed up by senior Sarah Stevenson, Liberty senior goalie Chantal Lischynski makes a save in last weekend's sweep of the University of Massachusetts.

The morning after taking a 3-0 lead in the first period of its opener at Colorado State University only to settle for a 3-3 tie, Liberty University's ACHA Division I women's hockey team opened a 3-0 advantage after two periods and held on for a 3-0 victory over the Rams.

Leading scorer and junior captain Carrie Jickling started the scoring for the Lady Flames on Sunday, finishing an assist from Courtney Gilmour six and a half minutes into the first period.

Then, just a minute and a half into the second period, still clinging to a 1-0 lead, Liberty senior forward Amanda Grainger took an outlet pass up the center of the ice and was awarded a penalty shot.

"She had a chance to rush the net and the girl was chasing her down and tripped her from behind," Lady Flames Head Coach Paul Bloomfield said. "On the penalty shot, Amanda went straight down through the five hole (of CSU goalie Mackenzie Roberts.) It was a nice goal and it changed the momentum of the game, encouraging the girls to keep up the fight."

With the 2-0 cushion, Liberty maintained control, adding a third goal for good measure with six minutes left in the second when sophomore forward Marissa Graham scored off an assist from senior forward Sarah Stevenson.

"It wasn't easy," Bloomfield said. "We had to stay on them the whole way through. Chantal (Lischynski) played very well in goal. They had some pretty good chances and our (defense) played well. We had some penalties, but we were able to battle through them."

Playing in a larger rink tested the Lady Flames' stamina, but they were able to finish off the shutout, outshooting CSU 46-27 for the game.

"It is Olympic ice, so the girls had to work harder," Bloomfield said. "A couple times, the girls were down five-on-thee and battled through it. The larger ice opened the game up a little more and required more passing and teamwork."

The Lady Flames (8-0-1) finished 3-0-1 for the Fall Break road trip, after sustaining their first blemish of the season on Saturday.

"We're happy with a road win," Bloomfield said. "Colorado State's definitely a stronger team than Colorado, so it was a good win."

On Saturday, Gilmour got the Lady Flames' three-goal first period started off an assist from Jickling four minutes after the opening faceoff. Stevenson scored off an assist from Graham two minutes later before Brittany Hymers finished feeds from C.J. Tipping and Autumn Kucharczyk just 8:04 into the action.

"We played a great first period and then totally derailed," Bloomfield said.

"The second period, we played really awful and then we took penalty after penalty in third period," Bloomfield said. "They just kept coming."

Junior Kristina Toppazzini got the start in goal and made 33 saves.

Liberty travels to face the Naval Academy in Annapolis, Md., next Saturday afternoon and Sunday morning before going to Chicago to play two games at Robert Morris (Ill.) on Oct. 24-25.