RedHawks rally from two goals down, storm past Flames, 7-2 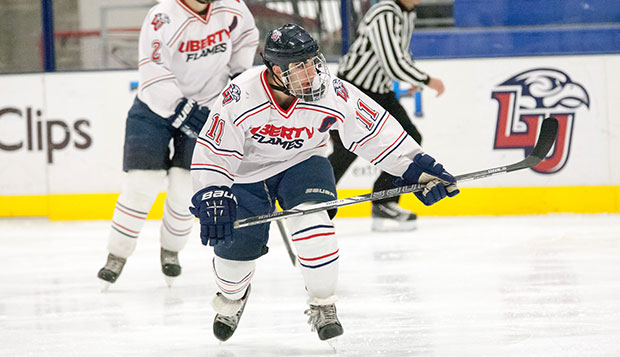 Flames senior forward John Cotton controls the puck in Saturday's game against Miami of Ohio at the LaHaye Ice Center.

This weekend's ACHA Division II men's hockey showcase hosted by Liberty University features four of the top teams in the Southeast Region. A night after shutting out one of their closest rivals, Virginia Tech, the Flames yielded seven unanswered goals and lost to Miami of Ohio in a rematch of last season's regional tournament second-round game, also played at the LaHaye Ice Center, 7-2.

Miami overcame a two-goal first period by the Flames by netting four goals in the second and three in the third while shutting out Liberty for the final 45 minutes.

"They kind of took all of the momentum early in the second period and once they got going, we really had a hard time recovering," Flames Head Coach Chris Lowes said. "We took a penalty and they got a power-play goal and then they really just ran with it."

Liberty sophomore forward Kade McDaniel finished a point-blank shot in the left crease off a steal and assist from freshman forward Tim Bierema to start the scoring with 5:37 left in the first period.

Just 40 seconds later, junior forward Paul Ingles left a drop-back pass for senior defenseman Clinton Nigh on a fast break and sophomore forward Ben Freymond put the rebound of Nigh's shot from the high slot into the upper netting from deep in the right crease.

But from that point on, the RedHawks rallied to avenge last year's 4-2 season-ending setback, when the Flames scored three goals in the final 10 minutes of regulation.

Bradley Annas made a breakaway steal at center ice and beat Liberty senior goalie Justin Gortman one-on-one to get Miami on the scoreboard. Midway through the second period, Annas fed a pass to Timmy Spicola who found Joey Parizek in the left crease for a backhanded finish to tie the game at 2-2. Annas netted the go-ahead goal late in the period off assists from Parizek and Michael Frenzel before Andrew Dower made it 4-2 a minute later with a backhander in the left crease off a defensive breakdown.

"We had a couple letdowns and their top line really made us pay," Lowes said. "They've got one of the better top lines in the league. They're the same guys as last year, so we knew what we were getting into. We didn't have an answer."

Miami (5-1), which only lost to last season's ACHA DII national championships runner-up Florida Gulf Coast by one goal Friday night, outshot Liberty 32-23 on the night and Matthew Kovesdy made 21 saves.

The Flames have a short turnaround before facing FGCU, a 4-1 winner over Virginia Tech on Saturday, in their final game of the showcase, Sunday at 1 p.m.

"We've got to regroup very quickly," Lowes said of the Eagles (2-0), who lost to New Hampshire in last year's championship game after the Wildcats came from behind to eliminate Liberty in the semifinals. "It's a very good indicator of a playoff scenario, having to play back to back to back. They're going to be strong. It's only their third game of the year, but they've got a lot of talent all through their lineup."