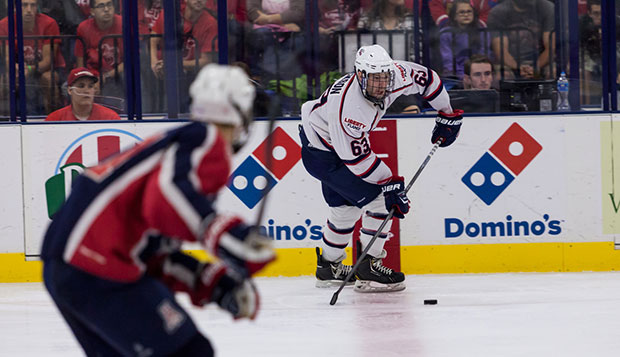 Senior forward Bram Erickson works the puck against Arizona in a game played last weekend at the LaHaye Ice Center.

Playing without its top two goalies and with a few other skaters slowed by injuries, Liberty University's ACHA Division I men's hockey team still managed to open a two-goal lead on Minot State before allowing the Beavers to bounce back for a 4-2 win and complete the series sweep, Saturday night at Maysa Ice Center.

"A lot of the guys played through injuries," Flames Head Coach Kirk Handy said. "It speaks volumes of the character we have in that locker room and their will to win."

Liberty scored first, five and a half minutes after the opening faceoff, when freshman forward Luke Simon finished an assist from sophomore forward Grant Garvin.

The Flames opened a 2-0 lead just seconds after the second-period faceoff when freshman forward Luke Hannon scored off assist from Ryley Egan.

"Our guys played a good hard game tonight," Handy said. "We had to battle through some frustration (but) at end of the day, we came up short, but we're proud of our effort, proud of (the) discipline we had."

The Beavers built a dam around their cage the rest of the night and netted three goals in the second period before adding an insurance goal in the third.

Eric Bollefer got Minot State on the scoreboard four and a half minutes into the second period before Bob Pond converted the tying goal with 11:53 to go in the period.

Brett Nespor scored his second goal, the game-winner, with 5:55 remaining in the second period before Logan Herauf capped the scoring with 12:35 left in regulation.

Minot State outshot Liberty 44-41 for the game, with Flames senior goalie Ian Harris, a call-up from the DIII squad, making 40 saves in place of freshman Josh Halpenny, who was injured in the second game against Navy on Sept. 20.

"Ian Harris found out today he was going to be playing in net for us and he handled it very well," Handy said. "He battled all night and kept us in the game. He stepped right in there and gave us a chance tonight. I'm proud of the way he played."

He was supported by a strong fortress of defensemen, even when the Beavers had the numbers in their favor.

"Our penalty kill was fantastic again tonight," Handy said. "(Ryan) Kerr and (Christian) Garland and (Kyle) Garcia and (Tyson) Street played really well on the penalty kill. They had a really good night."

Liberty will fly home on Sunday and return to home action Friday and Saturday nights against Davenport at the LaHaye Ice Center, for the first two games of the annual best-of-three Blue & Gray Cup.