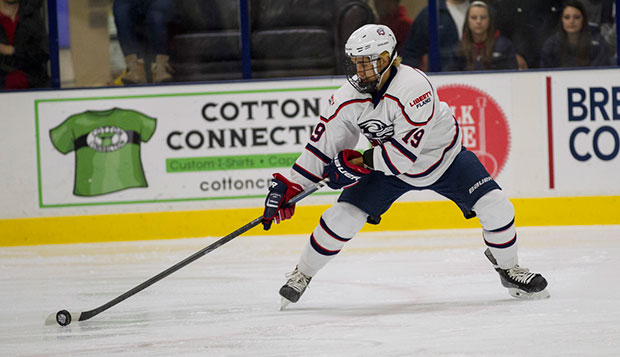 Liberty forward Tyson Street controls the puck in a recent home game. The Flames will seek to rebound from Friday's shootout setback to even the series at Minot State on Saturday night.

Liberty University's ACHA Division I men's hockey team got a taste of what playoff hockey is like on Friday night when it faced Minot State, the 2013 ACHA DI national champion, in the Maysa Ice Center in Minot, N.D.

The Flames (7-0-3), who remained at No. 8 in this week's third ACHA DI rankings, suffered their third shootout defeat in five ACHA DI games played this season, losing to the sixth-ranked Beavers, 6-5, after letting a 5-2 third-period lead slip away for the second game in a row.

Minot State (3-2) tied the game at 5-5 with less than three minutes remaining in the third period, forcing a scoreless five-minute overtime before the Flames were shut out in the shootout, allowing the Beavers to score on their second try.

"We still believe in every player in this locker room," Liberty Head Coach Kirk Handy said. "We believe this is a special team that can do great things. There's a lot of good things that we did tonight. Our guys battled through in this game. We just need to refine that to make sure we can play 60 minutes of hockey. This is a good opportunity for us to come together and to push this team to the next level.

"Sometimes, when you go through things like this, it's an important part of the process," he added. "We're going to learn from this, we're going to get better, and we're going to turn this thing around."

Liberty allowed the Beavers to get on the scoreboard first before netting four goals in a row, including the first by freshman Paul Lamoureux, who missed the first nine games with an injury. The Flames also got two goals from senior forward and alternate captain Lindsay LeBlanc and single scores from freshman defenseman Colt Steele and junior forward Bram Erickson, who buried the rebound of a shot by Lamoureux to push Liberty's lead to 5-2 early in the third period.

"Our guys worked hard (offensively) for most of the game tonight and (defensemen) Christian Garland and Ryan Kerr did an especially effective job on the penalty kill," Handy said.

The Flames get a rematch with the Beavers on Saturday at 8:30 p.m. (EST) as they seek to salvage a third straight ACHA series split.