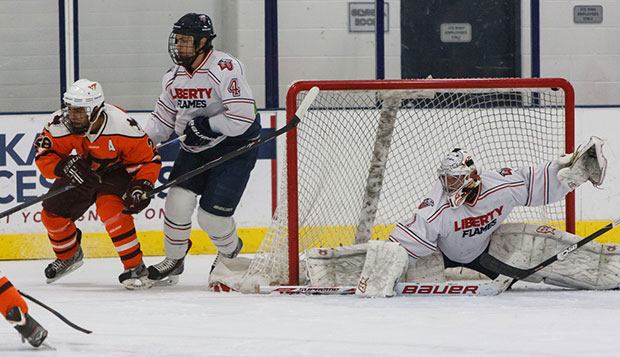 Liberty senior goalie Justin Gortman looks to make a save as defenseman Lucas Ebel (left) ties up with a Virginia Tech forward.

"That came out of just a routine play," Kuhn shrugged after the fact. "I was able to beat one guy, and I saw Paul (Ingles) going to the net. I thought I would try to slide it down to him, knowing that he would have a break."

Instead, in what seemed like slow motion, the puck continued to drift along undisturbed, right past the goalie's pads and into the back of the net.

The game, the first in the Flames' and Hokies' inaugural best-of-three "Battle of the Blue Ridge" and just one in the weekend's annual men's DII showcase, got off to a slow start for both squads. But after back-and-forth play that produced decent shots on both ends, Liberty gained momentum and commanded puck possession.

The Hokies weathered a barrage of narrowly missed shots, including a penalty shot taken by Kuhn stopped by starting Virginia Tech goalie Walker Detweiler. But with time winding down in the first period, the Flames finally broke through the scoring barrier.

Four minutes before first intermission, forward Ingles led a Flames' drive into the attacking zone and passed the puck to Kuhn, who skated it behind the net and dished to sophomore forward Ben Freymond for a backhanded score.

Minutes later, sophomore defenseman Daniel Huntington sniped a wrist shot from the faceoff circle off another assist from Ingles and linemate James Thayer, and the Flames headed to the locker room up 2-0.

The Hokies responded by changing goalies — sitting Detweiler for Kirk Smith — and opened the period with an offensive push that put Flames on their heels.

Virginia Tech simply couldn't finish, however, as it had a one-timer glance off the crossbar and a breakaway chance off a sloppy Flames line change wiped away by a diving effort from Liberty defenseman Roger Roulette III.

"I think we weathered their storm in the second (period)," Liberty Head Coach Chris Lowes said. "They were good. They had a couple of really good opportunities — a couple that probably should have gone in — and it was important, getting through the first 10 minutes of that second period and calming down."

With senior goalie Justin Gortman directing the defensive effort and holding strong between the pipes, the Flames regrouped. The penalty kill unit anchored Liberty's effort and contributed a point of its own on the shorthanded score by Kuhn, assisted once again by Ingles.

"(Penalty kill) is something we've focused on the last couple of weeks," Lowes said. "We've been watching video and working on it, because we just weren't quite there yet. We were missing a couple of rotations. But when (the unit) is ‘on,' it can be pretty effective in eliminating good chances."

After killing off their own penalties, the Flames scored the game's final goal on a power play. With just under nine minutes left in the period, Kuhn and fellow senior forward Caleb Grow assisted sophomore forward Devon Docksteader to put the Flames up 4-0.

"Our special teams have been awesome," Kuhn said. "We gave (Virginia Tech) a couple of power plays today and they came out with the goose egg, so that's good on penalty kill, and we were able to make things happen on our power play. It's great to see our special teams execute."

Liberty continued to win the possession battle well into the third period. Despite rough play as time wound down, the players kept their heads and the lead to the final buzzer. The win bolsters the Flames to an overall record of 9-1 and will provide them with some momentum heading into their next showcase matchup against the University of Miami Ohio, Saturday at 6 p.m.