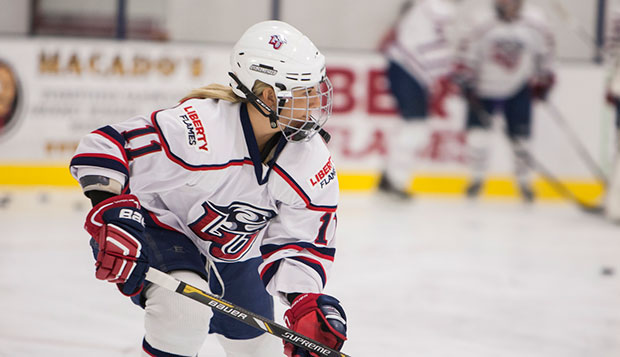 Liberty University ACHA Division I women's hockey junior forward Carrie Jickling netted three goals for the second night in a row to propel the Lady Flames to an 8-1 triumph and two-game sweep Thursday night at the University of Colorado Ice Arena in Boulder.

The five-point night brings Jickling's season total to 10 goals and seven assists, lifting her ahead of Rachael Booth and Hayley Williams of defending national champion Miami of Ohio into the ACHA DI scoring lead.

Junior forward Catherine Burrell added a goal and three assists, setting up Jickling's first two goals five minutes into the first period and again with three minutes left in the second, extending the lead to 3-0.

Freshman goalie Rosie Kelley made 20 saves to pick up the win in her first start in goal for the Lady Flames. Sarah Mullen made 45 saves in net for the Buffaloes.

Liberty outshot Colorado 53-21 for the game. In contrast to Wednesday's one penalty, Thursday's contest was marked by 13 infractions — six by the Lady Flames and seven by the Buffaloes.

"It was not quite as wild as last night," Bloomfield said, noting Liberty took 70 shots in the opener. "A couple of little injuries got us off our game, but the girls played really well."

Senior forward Amanda Grainger gave Liberty a 2-0 lead with 10:39 left in the first period, converting off of Jickling's first assist. With the Lady Flames on a power play midway through the second, Grainger got struck in the head by a puck, but she came back to score the game's next goal unassisted, three and a half minutes into the third period.

"She got a clean break and beat the goalie," Bloomfield said.

A minute later, Burrell scored off feeds from freshman defenseman Alexis Alexopoulas and Jickling, who netted the sixth goal with 8:55 remaining, assisted by Alexopoulas.

With 6:15 left to play, Meghan Lukens scored the only goal of the series for Colorado off assists from Gillian Ford and Madison Stevens, ending Kelley's bid for a shutout.

Lady Flames senior Stephanie St. Amand got that one back a minute and a half later with a spectacular move and finish.

"That was a beautiful goal," Bloomfield said. "(Junior defenseman) Brittany Hymers got the puck at center ice and passed it up to St. Amand who went to work. She went in and beat the goalie and backhanded it over the goalie's shoulder. She made it look easy."

The Lady Flames will spend Friday at Estes Park in northern Colorado before facing Colorado State University on Saturday at 10 p.m. (Eastern Standard Time) and Sunday at 11:45 a.m. (EST).

"We got banged up a little bit tonight, but we'll have (Friday) off and be ready to play on Saturday," Bloomfield said.

"I expect Colorado State's going to be a better team," Bloomfield said. "It had a coaching change last year and was considerably stronger than in previous seasons, so we're looking forward to some good competition."