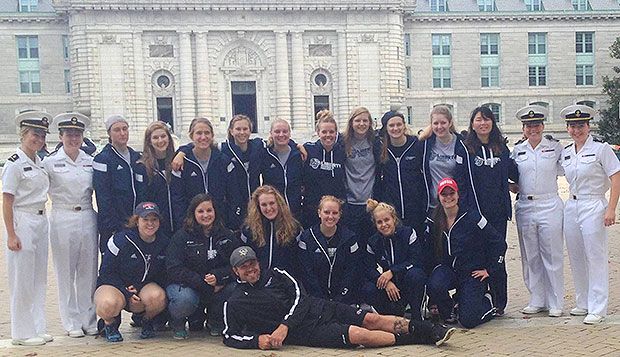 Two goalies for Liberty University's ACHA Division II women's hockey team faced a barrage of 122 shots in two games at the Naval Academy last weekend. Both allowed nine goals in 9-0, 9-0 season-opening setbacks against the ACHA Division I Midshipwomen on their home ice in Annapolis, Md.

"They were a very strong DI team and really knew how to utilize the Olympic size ice," Lady Flames Head Coach Sara Niemi said. "With a majority of our players still being inexperienced, it was hard for us to keep up with a strong skating team on the larger ice surface. Although we lost both games 9-0, we gained a lot of game experience playing a DI team."

In Friday's first game, freshman goalie Faith Gerber made an astounding 68 saves, but Navy outshot Liberty by a 77-3 count. The Lady Flames continued to fight, even in a losing battle.

"After the first period of facing 48 shots, we started to shut their offense down and only allowed 18 shots in the second period and 14 shots in the third period," Niemi said. "Even though we were down on the scoreboard, the team continued to pressure and pursue a goal. We had one great scoring opportunity in the third period, when (junior forward) Christina Fisher was in the right place for a rebound and had an open net, but the goalie made the save."

Sophomore keeper Emily Thomas started in goal in the second game and Liberty cut Navy's shot total to 45, while increasing its shot total to nine, but the Midshipwomen again found the net nine more times while denying the Lady Flames a goal.

"We took more shots than the first game," Niemi said, noting Liberty had its best scoring chance denied by a no-call. "(Sophomore defenseman) Alyssa Davis getting hooked on a breakaway in the second period, but the referees did not give us a penalty shot. This was one of our best scoring opportunities of the game."

After the match, the Lady Flames toured the Naval Academy while getting to know some of the Midshipwomen.

"Overall, the weekend was positive as we learned what else we need to strengthen offensively and defensively," Niemi said. "We are now preparing for our game at the University of Virginia on Oct. 18. We lost to them in overtime last year, so we are working towards getting our first win of the season."