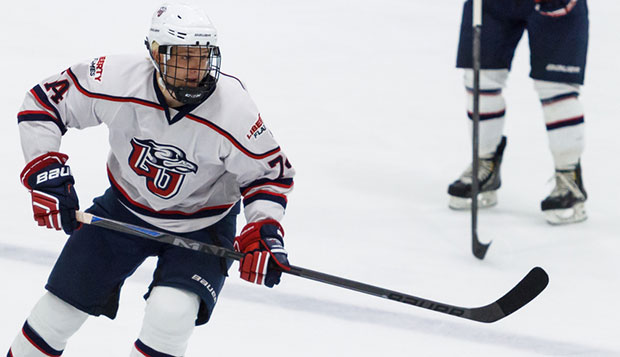 Liberty University's ACHA Division I men's hockey team is making the trek all the way to North Dakota for its first road trip of the season. The No. 8-ranked Flames, who will play seven of their next nine games away from home, flew out of Lynchburg on Thursday morning to challenge No. 6 Minot State in the northern section of the state, just south of the Canadian provinces of Saskatchewan and Manitoba.

As ACHA Division I Independent programs, the Flames and Beavers both face logistical challenges to fill out their schedules and often must travel outside of their geographical regions. Liberty will fly to Arizona on Oct. 22 for two games against the Wildcats — who split two games with the Flames last weekend in Lynchburg — and one against defending ACHA DI national champion Arizona State.

"Minot State is a team we have on the schedule for four more games in the 2015-16 season as well," Liberty Head Coach Kirk Handy said. "There is a lot of mutual respect. It's a long way to travel for both teams, but we're looking forward to it. Any time you can go play a top team in their barn, it's a good experience for our guys. It'll be a great test and a great opportunity for us."

"It's going to be two solid teams slugging at it all weekend," he said. "Both teams are going to be up for the series and we're really looking forward to it. These types of games that you play at Minot and Arizona State are going to be the type of games you'll play at nationals. The key is to play 60 minutes of solid hockey."

Liberty Scouting Report: The Flames suffered their second shootout loss in two ACHA series this season last Saturday afternoon, letting a 5-2 third-period lead slip away in a 6-5 loss to Arizona, a team it blanked 8-0 the night before.

Offensively, Liberty has received balanced production, with 11 players posting five points or more through seven games, led by the first line of freshmen Luke Hannon (six goals, 10 assists) and Luke Simon (7G, 5A) and senior Lindsay LeBlanc (3G, 11A). Senior defensemen Matt Sherry (5G, 4A) and Cam Bakker (3G, 6A) rank tied for fifth in scoring for the Flames with freshman and sophomore defensemen Ben Hughes and Chase Harris tied for 10th.

Minot State Scouting Report: The Beavers opened their season with 8-4 and 4-1 victories over Briercrest College in Saskatchewan before being swept by Arizona State University in their home openers last weekend, 3-1 and 4-2, in matchups between the last two ACHA DI national champions.

Of Minot's 17 forwards, 10 are new to the team this season. But the Beavers feature a balanced attack with 17 players scoring at least one point through four games. Even senior goaltender Riley Hengen has distributed an assist.

Jeremy Johnson, an ACHA All-Rookie first-team selection who led the offense with 30 goals and 22 assists last season, is tied with freshman forward Sam Briscoe for the team scoring lead with three goals and one assist through four games. Logan Herauf (16G, 17A) and Brett Nespor (14G, 19A) finished tied in scoring last season with 33 points each.

All-time series: Liberty is 0-1 against Minot State, losing the teams' only previous meeting 3-1 on Oct. 6, 2012, in the second game of a three-game showcase in Springfield, Ill.