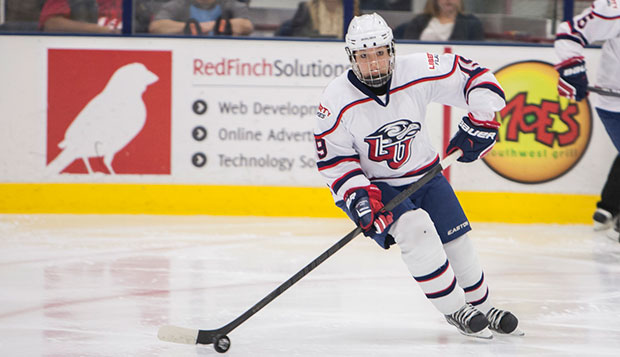 Freshman defenseman Alexis Alexopoulas scored her first goal of her Liberty career early in the second period of Wednesday night's 8-0 romp over the Buffaloes.

Liberty University's ACHA Division I women's hockey team dominated the first of two games at the University of Colorado on Wednesday night, blanking the Buffaloes, 8-0, by outshooting their hosts, 70-21.

"We went after them," said Liberty Head Coach Paul Bloomfield, whose team improved to 6-0. "Their goalie wasn't too bad and they didn't play a bad first period. Our girls really started to roll and in the second period, just kind of ran on top of them. The girls played a really good game. The transition was good and the passes were tape to tape."

Jickling capitalized on the game's only power play, finishing an assist from senior forward Stephanie St. Amand with 3:08 remaining in the second, pushing Liberty's lead to 6-0.

Senior Chantal Lischynski started in goal and posted her second shutout, making 21 saves to raise her save percentage to 98.8 through three games.