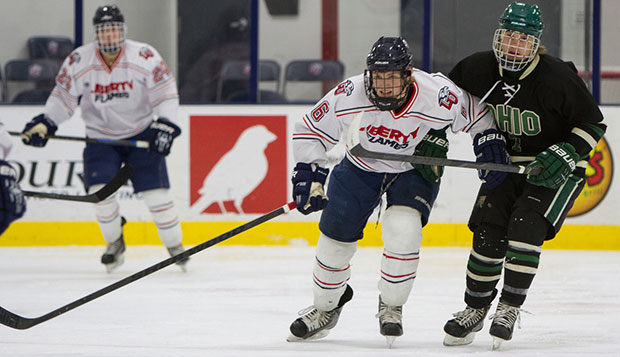 The difference between Liberty University's ACHA Division II men's hockey team's games against Ohio University over the weekend were like night and day, Saturday night and Sunday afternoon in the LaHaye Ice Center.

After scoring six goals in the first period of Saturday's 12-3 triumph, the Flames found themselves in a 3-0 hole early in the second period of Sunday's rematch with the Bobcats, who fended off a valiant Liberty comeback to emerge with a 6-4 upset and salvage the series split.

"Just complete and polar opposite first periods of the two games this weekend," Liberty Head Coach Chris Lowes said. "They came out flying and we anticipated they would (but) I don't think we were ready for their intensity. They probably had more hits in the first period (Sunday) than they had all game (Saturday) night. They just had a lot of energy and were really playing aggressive and quick hockey. We made a couple mistakes and they made us pay and we just had a hard time recovering."

Ohio (3-1) extended its lead to 3-0 when Austin Reynolds netted his second score by putting away a backhanded shot past Liberty senior goalie Cary Byron from deep in the right crease.

That's when the Flames (8-1) fired up their offense, showcasing the type of finishing authority they had from the start on Saturday by converting three goals in the final 13 minutes of the second period to draw to within 4-3.

Paul Ingles, crashing into the left crease, slammed home the rebound of a turnaround shot from center by fellow junior forward Josh King to end the shutout. Then, after two terrific saves by Byron, Devon Docksteader sparked a fast break with an outlet pass to fellow sophomore forward Ben Freymond, who dropped the puck back to Ingles for another bullet into the back of the net.

The Bobcats capitalized on a five-on-three power play to push their lead to 4-2 on Dominic Visalli's finish in the left crease before Liberty sophomore defenseman Roger Roulette III checked an Ohio player into the corner, winning the puck back to senior defenseman Jackson Kuhn. He started a counterattack with an outlet pass to Docksteader, who pulled the Flames back within 4-3 with a wrist shot that beat Ohio goalie Joe Juratovac to the top shelf.

The Flames tied it up on a five-minute power play when junior forward Peter Kazmierczak slid the puck though traffic in the right circle past Juratovac inside the left post with 12:52 left in the third period. However, they gave up the game-winner 48 seconds later when Collin Gustafson beat Byron to the five-hole on a short break through the left circle.

"That was a back-breaker," Lowes said. "We had momentum, we were playing well. But all that momentum quickly goes away giving up a shorthanded goal. I think Cary would like to have that one back. He probably stops that nine out of 10 times."

Kevin Rodgers, who had been called for the five-minute infraction earlier in the period, later iced the victory for Ohio by winning the puck along the right boards, pivoting, and firing from the red line into an open net with 20.8 seconds left.

Liberty will host its first showcase tournament next Friday and Saturday at 6 p.m. and Sunday at 1 p.m. against Virginia Tech, Miami of Ohio, and Florida Gulf Coast University, respectively, at LaHaye.

"We're going to have to be at our best, have a good week of practice, and we can rebound from this," Lowes said.