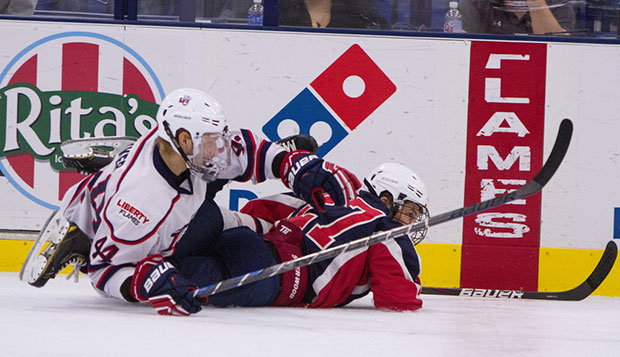 Liberty senior defenseman Cam Bakker (44) and Arizona forward Robbie Wilkinson took each other out along the boards, Saturday at the LaHaye Ice Center.

Arizona defenseman Brett Fagerheim delivered the dagger in the shootout, deking around Liberty sophomore goalie Matt Pinel before wrapping the puck around his right pad into the back of the net to help seal the Wildcats' 6-5 shootout upset.

"It's not what we wanted," Liberty Head Coach Kirk Handy said. "We want to get the game over a long time before the shootout. We had the opportunity tonight and we let it go and anytime you let it go it's 50-50 when it gets to a shootout."

Liberty overcame an early 2-1 deficit with two goals midway through the second period and seized what seemed to be a commanding 5-2 lead with two more scores in the final 90 seconds of the stanza, but failed to carry that momentum over into the third-period.

"We made some mistakes and we sat back as a team and didn't attack," Handy said. "That let them back into the game and ultimately gave them the win. We took a couple of penalties and put them on the power play and they came back to score. They played a good game tonight. We didn't play as well today."

The result of the rematch was dramatically different from the teams' first meeting on Friday night, an 8-0 Liberty victory. It was the third straight season the Wildcats (2-1) had salvaged a split on the Flames' home ice.

"That's a good team over there," Handy said. "We caught them on an off night (on Friday) and were able to take it to them. It was a mindset. You go up by three and the next thing you think you're going to score three or four more and that didn't happen."

Liberty (7-0-2), which outshot Arizona 40-22, had an apparent goal disallowed midway through the first period before giving up a power play goal less than a minute later.

Freshman defenseman Ben Hughes launched a shot from the high slot that veered just wide of the net before senior defenseman Cam Bakker controlled it behind the net and knocked it out front for senior forward Lindsay LeBlanc, who was called for interference of Wildcats keeper Garrett Patrick before Liberty freshman forward Luke Hannon put away the loose puck near the left post.

Then, seconds after junior defenseman was called for a penalty for holding Arizona defenseman Alex Vazquez from behind on a one-on-one with Liberty sophomore goalie Matt Pinel, the Wildcats got on the scoreboard first when Alex O'Dea's slapshot from the top of the circle tipped off the stick of fellow forward Mike Adamowicz and flipped inside the top right corner of the cage.

Just over three minutes later, freshman forward Grant Garvin moved into a brief tie with Hannon for the Flames' scoring lead on the season by sticking in the rebound of a shot taken by senior forward Ryley Egan from the right circle that deflected off Patrick right to Garvin, who one-timed it into the net from deep in the left crease.

Arizona reclaimed the lead with its second power-play goal at the 15:39 minute of the second period when forward Robbie Wilkinson's shot from the top of the left circle took a fortuitous bounce off the back boards toward the cage, where Dylan Carter barely poked it across the goal line from near the left post.

Three minutes later, the Flames responded to even the score when Hughes and Bakker set up Hannon on the left wing. From there, he delivered a crossing pass to LeBlanc who perfectly timed his deflection past Patrick to tie it up at 2-2. Just 47 seconds after that, senior forward Christian Garland received feeds from senior defenseman Matt Sherry and senior forward Ryan Kerr, followed his own shot, and snuck the putback past Patrick inside the left post.

A dramatic counterattack extended Liberty's lead to 4-2 in the final minute and a half of the second period when Arizona defenseman Tommy Bennett had his shot off a fast break glance off the crossbar and rebound off the back glass up to Sherry along the right boards. He sent a quick transition pass to junior forward Bram Erickson, who beat Patrick with his shot to the top left corner.

Hannon netted the last goal for Liberty less than a minute later by finishing a three-on-two, one-timing a slapshot from inside the left circle off a give-and-go feed from freshman forward Luke Simon into the upper right netting.

But the Wildcats chipped away at the Flames' seemingly commanding advantage, starting with Adamowicz's high tip of a shot by O'Dea that flipped over Pinel's glove inside the right post with 9:05 remaining in regulation. Wilkinson made it a one-goal game by shuffling in a loose puck off a long shot from the high slot that got behind Pinel.

Garvin was called for a retaliatory penalty after being pushed into the boards behind the Wildcats' cage, putting Arizona back on the power play and it capitalized with the equalizer when O'Dea skated in from the right endline and lifted the puck inside the right post off Pinel.

In the shootout, Hannon answered a score by O'Dea to keep the Flames tied after the second round, but after Fagerheim put the Wildcats back on top, Simon was unable to do the same after faking out Patrick to the right side.

Liberty will embark on its first road trip of the season on Thursday when it travels to 2013 ACHA DI national champion Minot State (N.D.)

"We're going to regroup this week and be ready to go to Minot next weekend and play well," Handy said. "Any time you can go play a top team in their barn, it's a good experience for our guys. It'll be a great test for us."