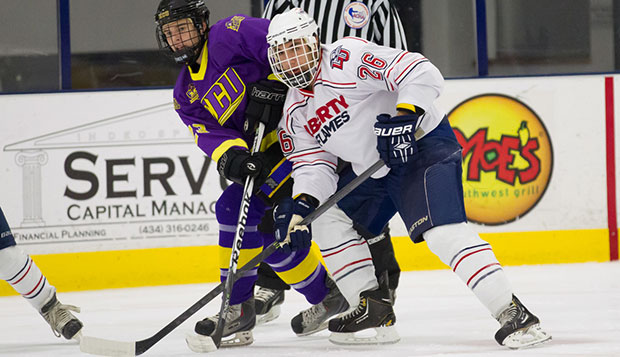 "We did a really good job of establishing our forecheck," Liberty Head Coach Rett McGibbon said. "We got the puck in deep and we have quick forwards and we were on top of their (defensemen), who were bigger and perhaps a bit slower, so we did a good job of really hemming them in their zone all night."

Liberty were called for 11 penaltiess to just five for VCU, but still scored two power play goals to one for the Pirates.

On Saturday, the Flames committed twice as many infractions as the Patriots, but scored three power play goals during GMU's four trips to the penalty box.

Cockburn netted the Flames' first and final goals, both on power plays, early in the first period off assists from Beresid and freshman forward Connor Sheehey and midway through the third off assists from Burman and senior goalie Ian Harris, who also came up big in the net.

"Ian stopped a penalty shot and he made a couple huge saves on a power play that would have brought them back within one," McGibbon said.

"Then we locked it down pretty good defensively in the third," McGibbon said. "(On Friday), I thought we played a better game. We kind of stuck to our system better, just getting the puck in deep and really kind of dominating in the offensive zone. (On Saturday,) it was little tough to get our bodies in motion this early to play hockey. We weren't moving our feet until the end of the second period."

Liberty (3-0) will get another shot at GMU on Nov. 1 in a game that will count in the Colonial Division standings.