After slow start, No. 3 Lady Flames surge past No. 2 UMass 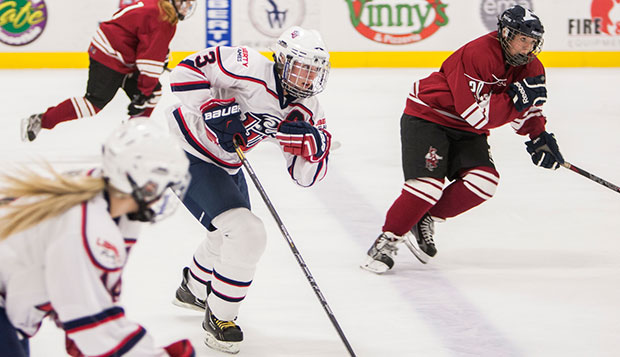 Liberty University's ACHA Division I women's hockey team, ranked No. 3 in the ACHA DI preseason poll, started slowly but finished with a flurry in its series opener against the second-ranked University of Massachusetts, late Friday night at the LaHaye Ice Center.

The Lady Flames (4-0) scored two goals in the last 10 minutes of the second period to seize a 2-1 lead and added two more in the final five minutes of the third to ice the 4-1 victory, avenging a loss to the Minutewomen (2-1) in the first round of pool play in last season's ACHA DI National Championships.

"It was slow tonight getting going, and then in the third period, we took a second wind and went at it," Liberty Head Coach Paul Bloomfield. "Finally, it started to click in the second period, and then we slowly started to build momentum."

"We came into this knowing it would be a close one," Lady Flames captain Carrie Jickling added. "We had a really close game with them last year at nationals. This will definitely help our rankings a lot, getting a win under our belt."

Jickling broke the scoreless tie by taking a fast-break pass from fellow junior forward Catherine Burrell and launching a wrist shot that beat Massachusetts senior goalie Kasey Zegal top shelf to the glove side with 9:45 left in the second period.

"I just kept my head up and looked in the middle and I saw Carrie there, so I just passed it over," Burrell said. "Things work better when we get our head up and move quick."

"Tape-to-tape passes," Jickling added. "It was right on the money. I just came in and kind of used the defenseman as a screen, aimed, and shot to the open corner."

But the Minuetewomen (2-1), who had opened their season last weekend with 8-1 and 6-1 wins over New Hampshire, tied the game at 1-1 with just over three minutes remaining in the second period. Junior forward Ally Perdios won the puck along the right side of the boards and tapped it to senior forward Meghan Crosby who sent a short pass to senior forward Amanda Abromson. Her quick shot from deep in the right circle beat Lady Flames senior goalie Chantal Lischynski, who had made two saves seconds before.

"We had girls out of position, and I felt two or three times our girls just left Chantal hanging out there to dry, which was tough," Bloomfield said. "We should have outplayed this team (but) our shots were almost equal."

UMass outshot Liberty 32-31 on the night, with Lischynski recording 31 saves.

"Chantal, our goalie, definitely has our back in every situation," Burrell said. "She's covering rebounds and making sure she's always on point in our crease. That's important."

Less than a minute later, Lady Flames senior forward Jenny MacArthur skated the puck up the ice and sophomore forward Marissa Graham followed her shot on goal by crashing the cage and putting the rebound in from near the left post, dragging a defender behind her for a 2-1 advantage.

Finally, with 4:49 left in the third, Liberty broke the game open after Jickling and Burrell cycled the puck down low and senior defenseman Madison Fischer unleashed a shot from the high slot that penetrated the Minutewomen's defense and found the back of the net.

Burrell capped the scoring with 2:35 to go by firing a blistering shot off a drop-back pass from Jickling that was too hot for Zegal to handle as it glanced off her glove and landed in the upper netting.

"Things are starting to click," Burrell added. "Once we got the momentum going there, we were able to find a way to bury them, finally, in the third period."

Liberty now has a 5-10-1 career record against UMass going into Saturday's 6 p.m. rematch at LaHaye.

"We've battled with them," Bloomfield said of the Minutewomen, who graduated six players but recruited eight more. "I really wanted this win. Now we've got that out of our way, let's go play hockey (Saturday) night. We need to finish the job and that would put us in good shape."

The Lady Flames are preparing for a mid-week road trip with games at the University of Colorado on Wednesday and Thursday and Colorado State next Saturday and Sunday.

"We have to come ready to play (because) we play six games in 11 days," Jickling said.