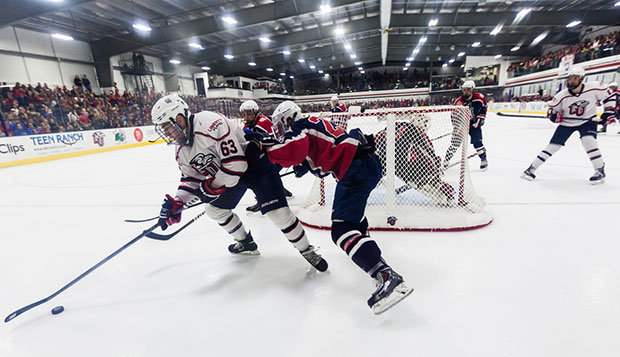 "It took the pressure off being up," Pinel said. "That was the first game we really put three periods together. It was a solid team effort by everybody."

"It was a solid win for us tonight," Flames Head Coach Kirk Handy added. "We had outstanding goaltending tonight and our guys worked hard."

Liberty (7-0-1) only outshot the Wildcats 34-32 while being whistled for 15 penalties, five more than Arizona.

"We need to refine the discipline and we'd really like to improve on the faceoffs," Handy said. "We had to rely on our penalty kill a little too much tonight. There were a couple times where we were down five-on-four and we were taking some unwise penalties."

Liberty capitalized on turnovers in the Wildcats' defensive end to net its first two goals, with the first coming just 1:16 into the action.

Flames junior forward Bram Erickson forced Arizona defenseman Brett Fagerheim to lose control of the puck behind his own net right to Liberty freshman forward Grant Garvin, who converted from a tough angle off the skate of Wildcat goalie Dylan Hojnacki.

With 11:12 left in the first period, sophomore defenseman Chase Harris intercepted a pass along the boards and sent a quick cross to senior forward Ryley Egan, who pivoted and scored in the same motion, flicking the puck into the upper-right corner of the net from inside the right circle.

Less than two minutes later, Erickson drew two defenders to him as he skated the puck toward the right endline before passing back against the grain to Garvin, who finished his second score top shelf with a shot from between the circles for a 3-0 advantage.

The line of Erickson, Egan, and Garvin produced four goals and four assists, accounting for half of the Flames' offensive production.

After Pinel gloved shots by Arizona forwards Dylan Carter and Shane Gleason late in the first period, he survived a rough second period, when Liberty's defense killed two five-on-three penalties by the Wildcats, the latter bridging the second and third periods.

"Defense did a great job tonight," Pinel said. "Fortunately, our penalty kill was pretty on. If it wasn't for them, it could have been a different game. Those (five-on-three power plays) were pretty tiring, but we got through it. I got knocked down a little bit, but my team definitely protected me."

Moments after Pinel sprawled out in a crowd to make a couple breath-taking saves, with a third shot caroming off the post, Liberty freshman forward Luke Hannon's shot was tipped just over the crossbar by senior forward Lindsay LeBlanc. Seconds later, LeBlanc fed the puck back to Hannon, who followed his own blocked shot by chipping the rebound from deep in the right crease into the upper netting.

Freshman forward Luke Simon got on the scoreboard with 5:40 to go in the second with a second-effort putback of a shot on goal by freshman defenseman Ben Hughes, sneaking it past Hojnacki from nearly behind the left side of the net to extend the Flames' lead to 5-0.

In the third, Erickson recorded his third assist, taking a pass from Harris and spotting senior defenseman Matt Sherry cutting backdoor through the right crease, where he one-timed the perfectly-placed assist from near the right post into an open net.

Tremendous individual efforts from junior forward Kyle Garcia and Egan generated Liberty's last two goals. With 5:45 to go, Garcia skated right to left behind the goal and whipped his shot into the upper netting past a screen set by freshman forward Colt Steele.

With 3:13 remaining, Egan received an outlet pass from Erickson and skated across the red line before eluding multiple defenders and cutting back across the crease from deep in the right circle. He maneuvered the puck around Hojnacki, depositing it into the net with a beautiful backhand.

"I saw the opportunity at the blue line, and then once I got by that first defenseman, there wasn't really anyone else there so I kind of just took it to the net and put it in the far side," Egan said. "Today everything seemed to be clicking for us. We seemed to be getting the bounces offensively. It was a good night, good for the team to boost the morale and get all of the boys together."

The Flames face a quick turnaround on Homecoming Weekend, with their rematch with the Wildcats (1-1) set for 3 p.m. Saturday at LaHaye.

"(Friday night was) a good start but (Saturday's) a new day, and we're going to have to come out with more energy and continue to work hard," Handy said.