Flames back in action tonight and Saturday against Arizona 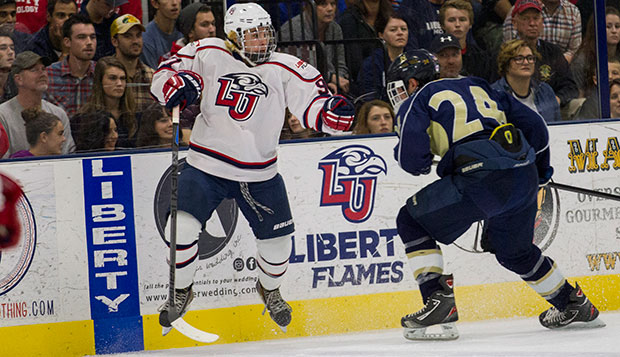 Liberty senior forward Ryley Egan leaps off the ice in anticipation of a check along the boards in the Sept. 19 game against Navy at the LaHaye Ice Center.

In each of the past two seasons, Liberty University's ACHA Division I men's hockey team has swept two games against the University of Arizona in the Tucson Convention Center only to split a pair of matchups with the Wildcats at the LaHaye Ice Center.

Now, coming off an ACHA season-opening split against the Naval Academy two weeks ago at LaHaye, the Flames are eager to defend their rink over Homecoming Weekend.

But Arizona (1-0), fresh off an 8-2 season-opening victory over Northern Arizona, an ACHA DII team, will be hungry for another upset on the Flames' home ice in its ACHA DI opener. Both teams are ranked in the top 20 in the second ACHA DI poll of the season, released on Friday.

Chad Berman, who served as an assistant coach at Robert Morris (Ill.) last season when the Eagles lost to Arizona State University in the ACHA DI National Championship game, takes over a rejuvenated Wildcat squad that earned its first national tournament appearance since 2006 and upset the top-ranked Sun Devils, their closest rival, for the first time in 37 meetings.

Liberty Scouting Report: Offensively, the Flames have leaned on their top line that features two freshmen — Luke Hannon (4 goals, 9 assists) and Luke Simon (6 G, 4 A) — and senior alternate captain Lindsay LeBlanc (2G, 9A). The three forwards rank first, third, and second, respectively, in scoring for Liberty, with three of its next four top scorers being defensemen — senior Cam Bakker (3G, 5A), senior captain Matt Sherry (4G, 2A), and Ben Hughes (2G, 3A).

Senior forwards Ryley Egan (2G, 4A) and Christian Garland (5A) are tied for fifth and seventh, respectively, among the team's scoring leaders.

In goal, the Flames have platooned freshmen Josh Halpenny and sophomore Matt Pinel with similar success, though Halpenny has had the hottest glove in the early-going, allowing just 0.80 goals per game with a save percentage of 96.4.

They also gave out a few game pucks to players who scored their first collegiate goals, with Alex Vazquez, Griffin Dyne, Jason Effertz, and Mike Adamowicz also finding the net against the Lumberjacks in a game played at Flagstaff, Ariz.

"We are not a team that is going to throw a top notch scoring line at you, but we do have four strong lines that can wear an opponent down," Berman said. "When the team sees Alex Nespor get four goals because he was going to the net with and without the puck, that sets the tone for how we have to play."

Garrett Patrick played all 80 minutes in net for the Wildcats, only allowing only two goals late in the third period while recording 24 saves for a 92.3 save percentage.

All-time series: Liberty is 8-2 against Arizona, after winning three out of four games against the Wildcats in each of the past two seasons.

Coaches: Handy is in his 15th season as the Flames' head coach, with an overall record of 314-128-16. Chad Berman is in his first season as head coach of the Wildcats, replacing Sean Hogan, who is now head coach at Ohio University. His career record is 1-0.