Liberty's full crew bound for Head of the Ohio in Pittsburgh 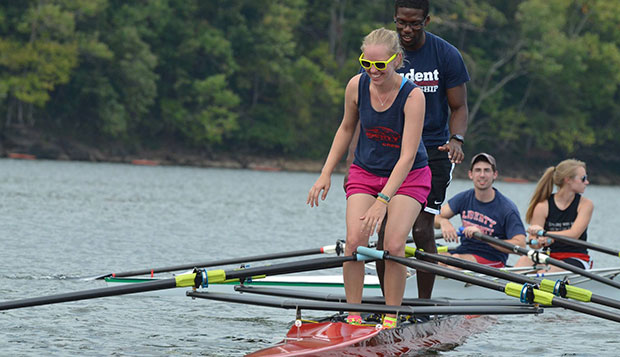 All 39 members of Liberty University's crew team — 15 varsity and 24 novice rowers — will leave by bus Friday at 8 a.m., with nine boats in tow, for Saturday's season-opening Head of the Ohio Regatta, hosted by the Three Rivers Rowing Association in Pittsburgh, Pa.

Following weeks of grueling early-morning workouts on Leesville Lake, the Flames are eager to test the waters in actual competition and leave opposing boats in their wakes.

"It's a pretty big regatta," she added. "It's a good way to start our season to see where we are compared with other schools. It will be similar competition from last year so we'll see how we've improved and set the standards high for the rest of the year. We're looking for a good journey."

The regatta will feature a series of 5,000-meter races, with the city skyline serving as a scenic backdrop.

"It goes right by the Steelers' stadium (PNC Park) in the downtown section of Pittsburgh," Morris said. "It's a straighter course than most 5Ks, with not too many turns, which will be nice."

Each race will feature a staggered start, with the boats released one at a time every 15 seconds.

"You want to try to gain on the person in front of you and lose the person behind you," Morris said. "It's definitely one of those more self-motivating races where you try to push yourself through the entire course. All of our 5K races will be like that. It's more strategy than all-out rowing. You have to choose when to make your move on the course and the end, about the last 500 meters, is still a sprint."

After running the ship by herself last season, Morris has enjoyed the support of former teammate Mitchell Dieudonne, who rowed for the Flames last semester and helped behind the scenes before officially being named assistant coach over the summer.

"It's definitely nice to have someone to talk things through with and establish goals," Morris said. "Mitchell's a very goal-oriented person so he's helped me a lot and he's done an excellent job of getting the rowers up to speed. I think they're as prepared as they can possibly be going into this weekend."

Morris has the greatest expectations for her men's lightweight four, which has a lineup of junior Joel Buckhalt in the stoke seat, senior Robert Newman, junior captain Sam Knauss, sophomore Kevin Brown in the bow seat, and coxswain Taylor Hardin.

"My varsity men are going to do really well," Morris said. "Four of the five of them have been rowing together for at least two years now. Hopefully, that will give them an upper hand."

The Lady Flames' women's double tandem of Rachel Williams and Emily Berguson are the only two rowers entered in multiple races on the day. They will be in a strong five-team double field as well as competing in the varsity women's open four.

"I'm excited to see where they're going to go," Morris said.

She also has high hopes for her novice women's eight team, which is not at all novice to the sport.

"This is the first time we've had a completely experienced women's eight," Morris said. "Everybody rowed last semester or in high school before. Their biggest competition will be the University of Pittsburgh and VCU, so they'll be fighting for those top three positions."

"We do not have as much experience in (the novice men's eight)," Morris said. "This is their first race. We're trying to get them more experience and let them see the racing world."

Live race updates will be available on www.regattacentral.com.