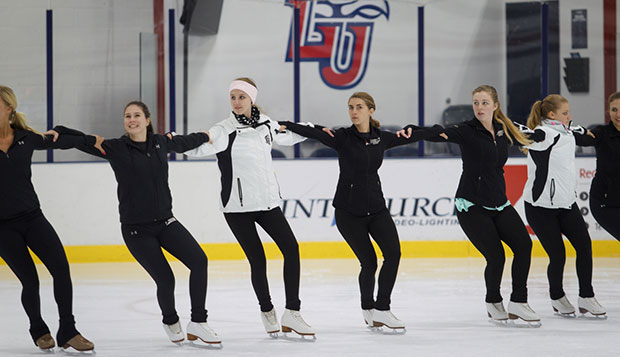 With the majority of its members returning from last year, Liberty University's synchronized skating team has gotten an early jump on the season.

The 12-skater ensemble, which includes four members of the figure skating team, has already begun perfecting the program it will perform twice this season before the Jan. 23-24 Eastern Sectionals, starting with the annual Thanksgiving Classic in Kingston, Mass., on Nov. 8. It will sharpen its skates for sectionals at the Mid-America Skating Championship, set for Jan. 17 in Fraiser, Mich.

"This is the first year we've had (continuity from the previous school year) and we're looking pretty good," Lady Flames Head Coach Tatiana Payne said. "We already got our whole program finished and we've been doing run-throughs for the last two weeks, so that's the furthest ahead we've ever been."

Some of the team's most advanced skaters are Rachel Halvorson, a senior who transferred in last year after skating with Disney on Ice, junior captain Caileigh Gallagher, sophomore captain Rebekah Leahy, and senior captain Caitlin Fontaine, who joined the figure skating team two years ago after playing lacrosse as a freshman.

Payne said the camaraderie among the Lady Flames this year is better than she's seen in the six years the synchronized skating team has existed.

"This year, we have a team that is bonded and gets along great, and they're just all about working together and seeing how far they can get together as a team," she said. "It's been really refreshing and really cool to see how productive practices can be when everybody wants to work together."

The theme to this season's routine is "Can-Can Beat," incorporating music from the "Moulin Rouge" and "Can-Can" productions on Broadway.

"We bought pink and black dresses and it's really fun and upbeat," Payne said. "They wanted to do something a little bit more lighthearted than last year with ‘Phantom of the Opera.' Nothing risqué, just fun and playful stuff."

On Oct. 26, Liberty will host a test session at the LaHaye Ice Center, where the team will perform the program for two national synchronized skating judges. They will in turn offer their critique, helping the Lady Flames to polish their routine two weeks prior to the first competition.

Payne is taking the same approach with her 18 competitive figure skaters, who don't travel to their first show until the Feb. 7-8 Eastern Sectionals in Massachusetts.

"We're really working on establishing programs and getting everybody geared up for competition this semester so that they're ready for next semester and they don't have any issues," she said. "They're ready to go when next semester hits. We're just gearing up and trying to get everybody as strong as we can as quickly as we can."

The only Lady Flames who will compete for both the synchronized skating and figure skating teams this season are seniors Halvorson and Kelsey Rieschl, Leahy, and freshman Rachel Yingling.

Both teams have benefited from strong recruiting classes in recent seasons.

"Last year was our big recruiting year as far as skill level," Payne said. "We had a lot of high-level skaters come in. This year is a year for numbers and just developing a good base. We got a lot of strong intermediate-level skaters that we're happy to have because we really had a hole there on our figure skating team. We're looking forward to seeing how we can do at our competitions this year."