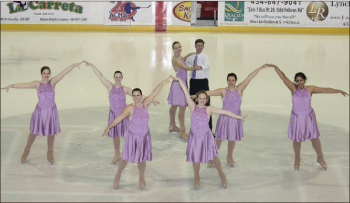 The chill of the rink. The tingle of adrenaline. The audible slice of blades cutting the ice. The red fingers and numb noses. The bloody knees. The unforgiving audience. The glory.

This is not hockey. It's synchronized skating at Liberty University. Meet LU Radiance.

Headed by captain Sarah LaRoche, and coached by Tatiana Gomez, LU Radiance is currently the only college team in Virginia.

There are eight skaters in LU Radiance, the minimum number required for competition.

"It is definitely a team sport," member Lindsey Wethington said. "If a person skates how they want to, it throws off the count and will mess everyone else up, causing the routine to look bad."

The team has to practice multiple times a week to perfect their synchronization and to get a routine down.

"Team members must be motivated and passionate about the team and the sport so that they will be committed to coming to practice on time," Gomez said. "Dedication is definitely my number one requirement of my skaters."

LU Radiance competes in the Open Collegiate section of the United States Figure Skating Association synchronized skating division. The team goes head to head against teams all over the country, including Boston College, Northeastern University and the University of Delaware. LU Radiance hosted an Eastern Regional competition and traveled to Lake Placid for the Eastern Finals competition in February.

Gomez said skaters simply have to make themselves aware of what everyone is doing, and then be able to do the exact same movements. It's all about teamwork, not skating as a singles skater.

"A skaters ultimate goal is to consistently improve, to reach certain levels, pass certain tests and strive for the overall goal of being a better and stronger team as a whole because of everyone's individual hard work and practice," Gomez said.

"I would recommend this sport to anyone," Wethington said. "You make a lot of friends, and it's a lot less scary than skating by yourself."