Flames make a racket in first MACRC tournament of season 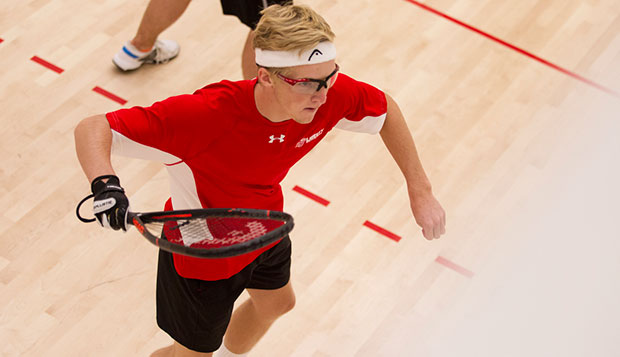 Liberty University's racquetball team made some noise this past Friday through Sunday at The Sports Racket in Lynchburg, where the Flames hosted the first Mid-Atlantic Collegiate Racquetball Conference (MACRC) tournament of the season.

One of nine schools in the event, representing all but six of the 14 MACRC schools, Liberty accounted for nearly one-third of the players in the field — 16 out of 49. The 12 men and four women combined to win nine singles and doubles titles in the Olympic format tournament.

"Overall, the Liberty team did very well," Flames Head Coach Danny Rodriguez said. "With 16 players, 12 of them were new to the sport, including all four of our women's players. So the results are really good for the first tournament."

Liberty wasn't the only team lacking veterans; 34 out of the 49 players in the field were novice to the sport.

"The majority of them were at Levels 3 and 4," Rodriguez said, noting 11 men played at Division 3 and 16 others competed at Division 4.

During a presentation held Saturday night, Phil Wheeler, commissioner of the conference, awarded Liberty its trophy for the 2013-14 MACRC regular-season champions and honored Rodriguez as Coach of the Year and the Lady Flames as the women's team of the year.

Liberty will travel to this season's second MACRC tournament Oct. 24-26 at UNC and the third, set for Nov. 14-16 at VMI. The Flames will host the fourth and final event in January.