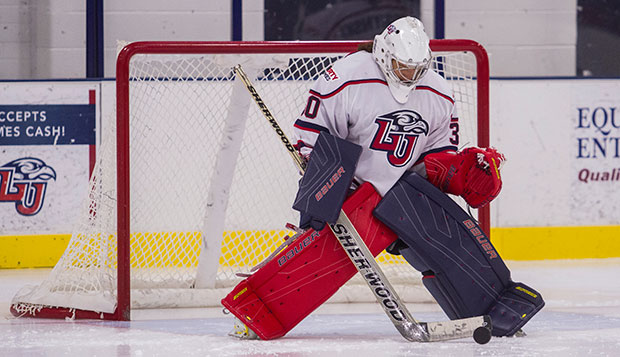 Junior goalie Kristina Toppazzini remained unscored upon through 80 minutes this season after making 26 saves against the Pride on Sunday.

The defensive-minded alternate captain made the most of her opportunity to shine on the front line, scoring the Lady Flames' first two goals in Sunday afternoon's 3-0 victory at the LaHaye Ice Center as Liberty, ranked No. 3 in the ACHA Division I preseason poll, completed a two-game sweep of the Pride.

"She played amazingly," Liberty Head Coach Paul Bloomfield said. "That's the good thing about Jenny. She plays both positions well. She's a very safe player, she's got good hands, she's always where she needs to be. She played a good game."

McArthur, who distributed two assists in Saturday night's 2-1 triumph, finished assists from senior forward Sarah Stevenson and senior defenseman Madison Fischer to lift Liberty to a 1-0 lead with 12:38 left in the first period Sunday. Then, at the 13:10 mark of the second, she received a pass from senior defenseman Autumn Kucharczyk, from near the right side of the red line, and beat Pride goalie Dyllan Nasr with a wrist shot from between the circles inside the left post for a 2-0 edge.

Moments after coming out of the penalty box late in the third period, Lady Flames junior forward Catherine Burrell capitalized on a steal and a short breakaway, lifting a shot from the center of the right circle into the upper left corner of the net for the final score.

After falling down 1-0 in the first period Saturday, junior forward Carrie Jickling scored the equalizer in the second off assists from McArthur and Fischer before freshman forward C.J. Tipping finished feeds from McArthur and sophomore forward Courtney Gilmour for what proved to be the game-winner.

"Both of the top two lines are going to be very productive," Bloomfield said of the line anchored by Jickling and Gilmour and the one featuring Stevenson, Tipping, and Graham, or McArthur.

"(Toppazzini) kept us in there two or three times today," Bloomfield said. "They were chasing us pretty good there in the first period."

Midway through the third period, Toppazzini used her glove to block a breakaway shot by Pride forward Kaitlin Parent, but the puck flipped over her head and landed near the goal line where two of her defenders dug it out behind her.

"That was amazing," Bloomfield said. "Topper played a great game."

Liberty (3-0) lost all three meetings with Washington last season before taking both games from the Pride this weekend.

"(Saturday night) was the first time that we've beaten them, so that's two in a row, which is good," Bloomfield said. "They do have a good team. We got off to a slow start both nights, but I felt the team kind of rallied and started to work hard."

The Lady Flames will have to maintain that level of intensity from start to finish for next Friday night's and Saturday afternoon's league openers against the University of Massachusetts, ranked No. 2 in the ACHA DI Preseason Poll.

"I'm looking forward to next weekend to see what UMass has," Bloomfield said. "We're right behind them in rankings, so it's a great way to start."