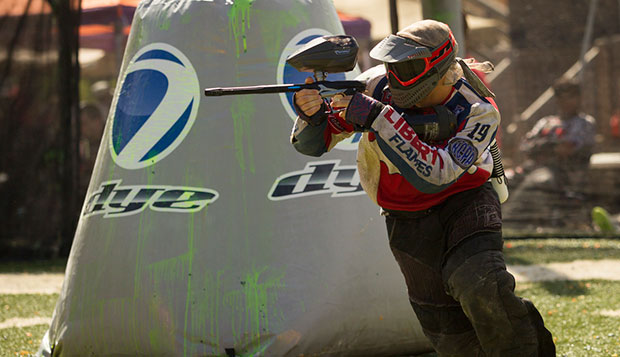 Liberty first-year paintball Head Coach Brian Davidson was impressed with his gold, white, and blue lines' first-, fifth-, and sixth-place respective showings out of 15 teams in the Class AA MSCC Event No. 1, held on the Liberty Paintball Fields. All three lines went 3-1 in preliminary play before the gold team defeated the white squad and the blue line fell to North Carolina State's top team in the quarterfinals.

There were 15 teams in the tournament, including the Flames' five lines, two from East Carolina University, Kennesaw, and N.C. State, and one each from Clemson, Lynchburg College, Radford, and VMI.

"It was a phenomenal start," Davidson said. "I couldn't have asked for anything better. We were pretty dominant. The gold line was looking really strong and our third and fourth lines did exceptionally well. I honestly wasn't expecting the blue and white lines to do that well. They shocked me and I was super excited about that."

Sophomore snakeside player Ryan Esquirrell stood out for the white squad and junior John Lewers was the top performer for the blue team.

Thompson played especially well on the snakeside up until he was hit twice in the opening seconds of the finals.

"He definitely helped the gold team get to the semifinals," Davidson said. "The other team started keying on him and shot him right off the break and the younger guys were able to step up after losing their captain and finish it off without him. It was very tight, but we ended up pulling it out."

Kyneil Tippett and Bobby Majuk, who start on the Dorito side, picked up the slack for Thompson along with deadbox player Christian Campbell and D Side starter David Dickerson. Tippett made a critical move in the first point of the final against Kennesaw, running down the Owls' last two players to preserve a scoreless tie.

The gold team struggled in its first preliminary match, losing 2-0 to the Owls.

"They really couldn't get into a good groove," Davidson said. "But from then on, they started getting on a roll and figuring things out."

Kennesaw's gold line finished in the top six at last season's NCPA National Championships. The Flames' gold line came in 11th in Class A before their blue and red lines came in sixth and 11th, respectively, out of more than 50 Class AA teams.

Davidson is in the planning stages and is "95 percent sure" that Liberty will host a Class A event, featuring the Flames' gold and red lines, either Oct. 18 or 25, before traveling to Kentucky for the Class AA MSCC event No. 2 on Nov. 8.