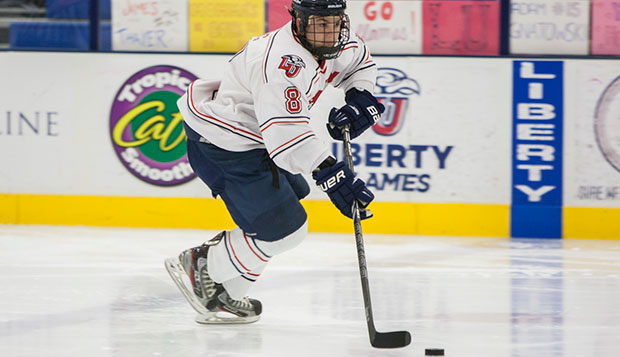 Junior forward Josh King controls the puck as he skates across the blue line at the LaHaye Ice Center.

Eight of the Flames' 14 goals came from its top offensive line of sophomores Devon Docksteader and Ben Freymond and junior Paul Ingles.

"We outplayed them, and outshot them," Liberty Head Coach Chris Lowes said. "Five-on-five, we looked strong. I'd like to see a little more production spread throughout our forward lines, but we spent a lot of time in their offensive end."

After being held scoreless in the first period of Friday's opener, Liberty netted three goals in the first eight minutes of Saturday afternoon's rematch.

Just two minutes after the faceoff at center ice, Ingles scored the first of the Flames' two shorthanded goals, chasing down a loose puck that he pushed across the red line and beating Golden Rams goalie Sage Wronowski one-on-one by lifting a shot top shelf.

Ingles later won a faceoff in the right offensive circle and flipped the puck to senior defenseman Lucas Ebel in the high slot. His slapshot slipped through Wronowski's glove and trickled inside the left post with 12:11 left in the first period. Thirty seconds later, Docksteader skated through traffic into the left circle before cutting back toward the goal and chipping a pass to Ingles deep in the right crease for a point-blank finish.

The Flames kept the pressure on and extended the lead to 4-0 early in the second period, when sophomore defenseman Adam Gnatowski delivered a pass from the top of the right circle between defenders to senior forward Jackson Kuhn, who redirected the puck with a one-time finish.

But West Chester cut the deficit in half by the end of the second period, capitalizing on two intercepted passes for breakaway scores. Corey Cahill made it 4-2 with 1:01 remaining by skating down the left wing and firing a shot from a tough angle that  glanced off Liberty senior goalie Justin Gortman's glove inside the right post.

"We gave up two breakaway goals and a really bad turnover in our end that led to their third goal," Lowes said. "Unfortunately, West Chester capitalized on our mistakes."

Less than five minutes into the third period, the Flames regained their offensive momentum when Kuhn threaded a pass from the right corner through traffic to freshman forward Tim Bierema, who converted his first goal of the weekend with a left-handed shot under the extended stick of Wronowski.

Junior forward Josh King made a shorthanded steal and pushed Liberty's lead to 6-3 with a tough-angled shot from the left side before the Flames killed a five-on-three West Chester power play and sophomore defenseman Daniel Huntington capped the scoring with a laser wrist shot from the point into the upper netting.

On Friday, Liberty senior goalie Cary Byron stopped 23 West Chester shots to improve to 3-0. Shut down in the first, the Flames caught fire on attack in the second period, when Freymond scored twice and Docksteader, King, and graduate forward Caleb Grow netted one goal each to seize a 5-1 lead.

Then in the third, Ingles got his first goal and Freymond completed his first hat trick of his Flames career for the final score.

Liberty will host Ohio, which is also undefeated and won its only meeting with the Flames 3-1 last fall in the first round of a DII Showcase, next Saturday at 9 p.m. and Sunday at 2:30 p.m. at LaHaye.

"We're excited and looking forward to the challenge," Lowes said.