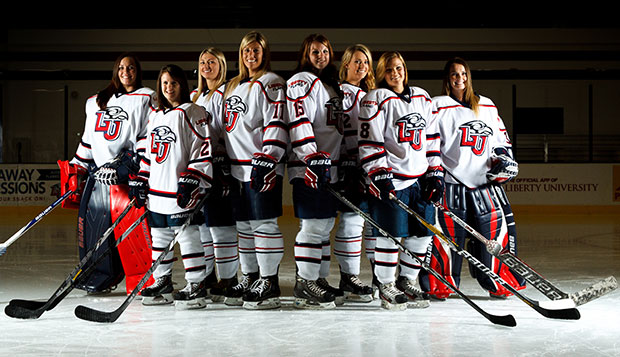 There's strength in numbers, a maxim Liberty University's ACHA Division I women's hockey team wants to prove this season as it contends for a third consecutive trip to the Final Four.

Ranked No. 3 in the first-ever ACHA DI preseason poll, based primarily on their third-place finish at last season's National Championships in Newark, Del., the Lady Flames boast one of the largest rosters in the league this year, with 22 players.

"We only really lost two players so it puts us in better shape than we've been in previous years," Liberty Head Coach Paul Bloomfield said. "We brought in five skaters and a goalie, and I feel like three of them will step right in and take over where the graduates left off. So we've got good potential, as long as we stay healthy."

The Lady Flames also have an abundance of power and perseverance on the ice.

"We're physical, we're strong, and we're pretty fast, so we can battle for the puck and win," said Liberty senior defenseman Autumn Kucharczyk, who anchors a defense along with senior Madison Fischer in front of stellar goalies Chantal Lischynski and Kristina Toppazzini. "On the ice, we've got a lot of chemistry. We're working well together."

The Lady Flames (1-0), who opened their season with a 6-0 victory over the Hamilton Hawks on Aug. 23, host the Washington Pride, a AAA-level high school travel team that swept all three meetings with last year, Saturday at 9:45 p.m. and Sunday at 2:45 p.m. in the LaHaye Ice Center.

They then challenge No. 2-ranked Massachusetts over Homecoming Weekend, Oct. 3-4, at LaHaye. Liberty also lost all three matchups with UMass in 2013-14 — twice in the regular season and once in ACHA DI tournament pool play.

"It'll be good for us to have a couple games under our belt before our home openers (against UMass), to work on our teamwork, power play, penalty kill, and make sure that we're communicating," Kucharczyk said.

Liberty, which finished as national runner-up to Minnesota in 2013, has a sense of urgency to capture its first ACHA DI national title. The Lady Flames feature a lineup with an ideal mix of tournament-experienced veterans and newcomers adding fresh fire.

"Making it to the Final Four the past two years has really made us want to go all the way and actually win it as a team," said Kucharczyk, who serves as alternate captain with forwards Jenny McArthur and Catherine Burrell under junior forward Carrie Jickling, Liberty's head captain and top returning scorer. "We're trying to keep a positive attitude all around."

McArthur moved up from defenseman to forward to fill in for injured sophomore Marissa Graham. She will start on the same offensive line as senior forward Sarah Stevenson and freshman Clarissa "C.J." Tipping.

"C.J. Tipping's a pretty dynamite player, so we've put her up on one of the front lines and she's really making an impact," Bloomfield said.

"I'm just so excited to finally get the season started," added Burrell, who will start on the same line as Jickling and sophomore forward Courtney Gilmour. "We definitely have a lot of chemistry and talent on our line. I can't wait to finally play some games and show other teams what kind of talent we have this year."