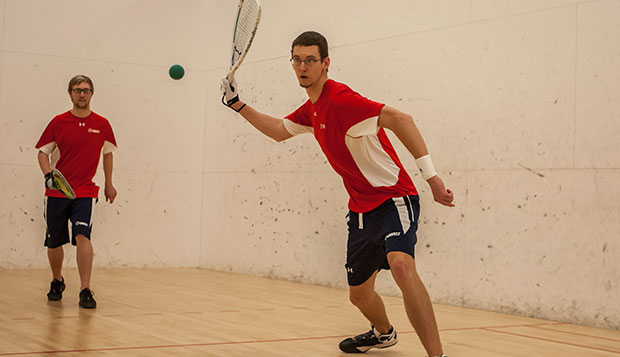 Ryan Evans (front), one of Liberty's two Level 1 players this season along with David Schreck, will miss this weekend's tournament due to a separated shoulder.

Liberty University's racquetball team will receive the 2013-14 Mid-Atlantic Collegiate Racquetball Conference regular-season trophy between 5 and 6 p.m. Saturday at The Sports Racket in Lynchburg, where it will hold the first MACRC tournament of the 2014-15 season, tonight through Sunday.

Repeating as regular-season champions may prove difficult for the Flames, who have a complete men's team this season but graduated four of their six women's players. All four of the current Lady Flames are beginners.

On their 12-man roster, the Flames feature two Level 1 players this season: senior David Schreck and  doubles teammate Ryan Evans, an online student who will sit out this weekend's tournament after dislocating his shoulder.

"We have about four men's players that have experience from last year," Rodriguez said. "The rest are new. We don't have the strength we had last year. We're starting out fresh. We're trying to recruit freshmen and sophomores so we can have them for three or four years."

This weekend, the Flames will host teams from Duke, North Carolina, Maryland, Virginia, and William & Mary. Later this season, Liberty will compete in three more MACRC tournaments — in October, November, and January, leading up to the March 25-28 USA Racquetball Intercollegiate National Championship in Tempe, Ariz.

"It's going to be interesting," said Rodriguez, who is assisted by former Flames standout Shawn Furman and Charles Billingsley, the worship leader at Thomas Road Baptist Church. "We're going to do the best we can. I think we'll do well, if the way we've been practicing is indicative. We haven't seen the other players yet so we don't know what we're going up against."