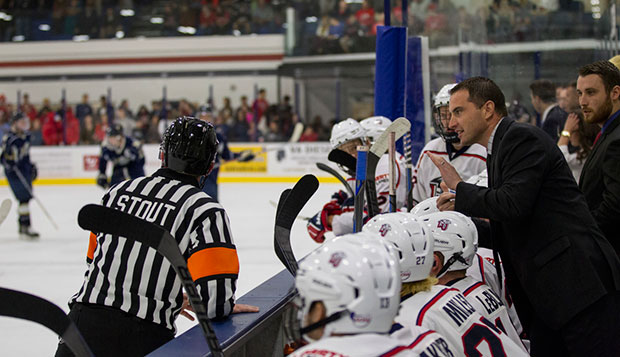 Liberty Head Coach Kirk Handy has a word with an official in last Friday night's game against Navy at the LaHaye Ice Center.

Due to unforeseen circumstances, Liberty University's ACHA Division I men's hockey team's games against Ithaca College, scheduled for Friday and Saturday nights at the LaHaye Ice Center, have been canceled. The Bombers (0-2) lost to Slippery Rock University 9-4 and 10-2 in their home and season openers last weekend.

Instead of playing a game, members of Liberty's team will host a free open session with students wishing to skate with the Flames on Friday from 7-8:30 p.m. at LaHaye, prior to the DII men's team's 9:45 p.m. faceoff with West Chester.

Liberty's DI men (4-0-1), ranked No. 7 in the ACHA DI preseason coaches' poll, opened league play last weekend by splitting two games against the 12th-ranked Naval Academy. The Flames lost the first game 5-4 in a shootout before winning the rematch 6-2 with four unanswered goals in the final seven minutes of regulation.

"We are excited to build on the third period of the Navy game," Liberty Head Coach Kirk Handy said.

"We're going to practice again on Thursday and be ready to go, to get ourselves set for playing Arizona over Homecoming Weekend," Handy said. "It'll be a great crowd and we're excited to play another high-level ACHA opponent."