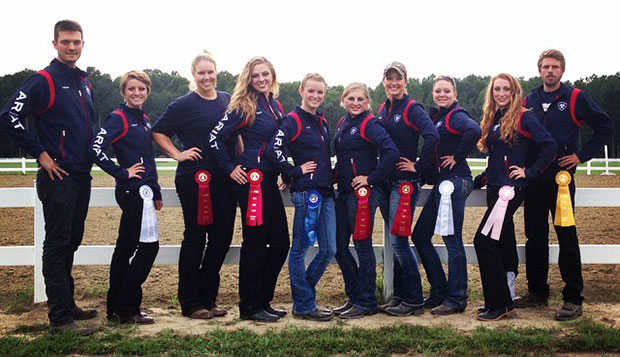 The Flames combined for a fifth-place finish out of 10 teams in Region 3 on Saturday and again in Sunday's second show.

"We had an awesome weekend," Liberty Head Coach Caroline Trexler said. "It was a challenge, just like last year, to be able to join a brand new region this year with a brand new team, but it's an excellent opportunity."

"Shelby did an absolutely tremendous job in preparing them for a show three weeks after we put a team together," she said. "To be as well received as we were and to have our riders do so well was really encouraging."

"Out of 18 classes, we walked away with 11 ribbons between first and second alone," Trexler said, noting each class had an average of six contestants. "Of the 18 ribbons we received, over half were for first or second place, which was really exciting."

"I couldn't have been prouder or happier with them," Trexler said. "Our riders did phenomenally. They rode and handled (their horses) from start to finish on both days just truly exceptionally. They really represented well."

St. Andrews features one of the most impressive equestrian centers Liberty has seen since it introduced its Hunt Seat team last fall.

"It was absolutely incredible," Trexler said. "Their facility was massive, excellently arranged, and beautifully maintained. The horses we had to ride were phenomenal and the event was wonderfully organized. Everything about it was fantastic."

Liberty's Western team will next compete Oct. 31 and Nov. 1 at Martin University for a two-show weekend co-hosted by North Carolina State. Liberty will co-host an event Jan. 31 at Campbell University.

On Oct. 4, the Lady Flames' Hunt Seat riding team will compete in its first Region 5 event of the season at Averett University.