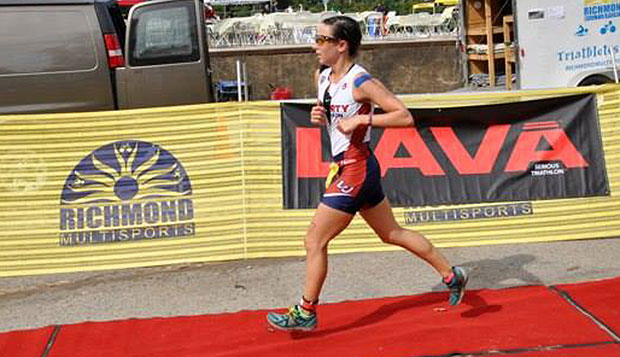 "For a lot of the athletes, this was the longest they've ever raced before, so it was definitely a learning experience from a fueling standpoint," Spencer said. "Some of them nailed it and some of them didn't, but I know every single one of those athletes is going to be stronger in the championships race because they've raced that distance now."

Paced by senior Joseph Anderson's fourth-place collegiate finish (sixth overall in 2 hours, 3 minutes, 36 seconds), the Flames placed third in the men's and women's combined team standings among the 15 schools represented in the race. The Flames trailed only the Naval Academy and Georgetown and finished ahead of Virginia, James Madison, Duke, North Carolina, and Appalachian State.

"Everyone finished right where I thought they would," said Spencer, who also raced along with several of the Endorphin Fitness athletes he trains in Richmond and placed ninth overall in 2:06.21. "Every guy that beat Joseph Anderson was from Navy and they were all professional triathletes just like he is."

"Tanner just got his cast off a week and a half ago and he did an Olympic distance race," Spencer said, noting Smith was allowed to run, but not swim during his recovery and cycled only on a stationary bike. "He has a ton of potential on our team."

Senior Ashley Fouse was the Lady Flames' first finisher in a personal-best Olympic distance time of 2:44:32 (86th overall), with senior Ginny Mitchell (90th in 2:47:34) not far behind.

The event opened with a mass swim start on the James River less than a mile from Spencer's Richmond residence, with the collegiate men and women starting together and the rest of the field of 500 triathletes entering the water five minutes later.

"The venue was incredible," Spencer said. "It was one of the more beautiful events that we've participated in. It kind of had a mix of everything." The city skyline served as a backdrop for the 1.5-kilometer river swim before the 40K cycling stage took athletes into into rural areas and the 10K run moved competitors to city streets.

Spencer plans to have Liberty train on the course of the MACTC Championships at Smith Mountain Lake at least twice on weekends before next month's regional race.

"From a physiological standpoint, I believe there's an adaptation that takes place," Spencer, referring to the transition from a sprint to an Olympic-distance triathlon, which is twice as long. "Their bodies are better adapted at that distance now. It won't be as much as a shock to the system."