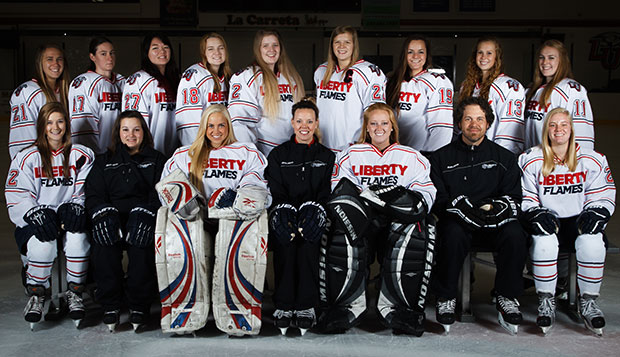 Continuity should be a strength of Liberty University's ACHA Division II women's hockey team this season, as 11 of 13 players on the roster are returnees from the 2013-14 squad.

One major void third-year Head Coach Sara Niemi had to fill in the offseason was in net, after the graduation of her younger sister Leanne Niemi. The Lady Flames' starting goalie since the program began in 2011 led the Delaware Valley Collegiate Hockey Conference (DVCHC) with 1,180 saves the past two seasons.

Sara Niemi recruited two new goalies to round out this year's roster — Emily Thomas , a sophomore transfer from the University of Colorado-Boulder, and Faith Gerber, a freshman from Ontario, the only Canadian on the team.

"Both will be vital players to our team's success this season as they both have a lot of experience in the net," Niemi said. "All of our other players are returning players which has allowed for quick chemistry to develop early in the season."

The Lady Flames, coming off an 0-13-1 campaign after going 0-12 in 2012-13, must maximize production from all of their players in order to record their first win since 2011. Opponents outscored Liberty by a 74-9 margin last season.

"We have a smaller bench this year, but each player will now be able to contribute to each game on a regular basis as we will now have set lines this year," Niemi said.

"We are very strong defensively this year, but we have been working on our defense to play more of an offensive style," said Niemi, who has help on the bench this season from assistant coaches Chad Duff and Rena Leone, a graduate student who played defense for the Lady Flames last season. "I am really excited to have additional perspectives which will allow me to focus on more tactical moves and strategies during games. With strong leadership this year, I believe we will have a successful season."

The Lady Flames are the southernmost school out of seven ACHA DII teams that compete in the DVCHC. They face their most difficult schedule since the team started in 2010, with 14 games against ACHA opponents and four additional contests against DVCHC rivals Virginia and Maryland.

Liberty will play 10 of its 18 games in the LaHaye Ice Center, but will start and end the season on the road, beginning Oct. 3-4 at the Naval Academy. The trip to Annapolis, Md., will be an especially challenging way to open the season as the Midshipwomen were recently promoted to the ACHA DI level.

"We have been practicing hard to ensure we will be in the best shape and position, starting against a Division I team," Niemi said. "We are anticipating a more defensive style of play because of our short bench and (Navy's) Olympic size ice surface, but we will be looking to capitalize on opportunities to come from the free space."