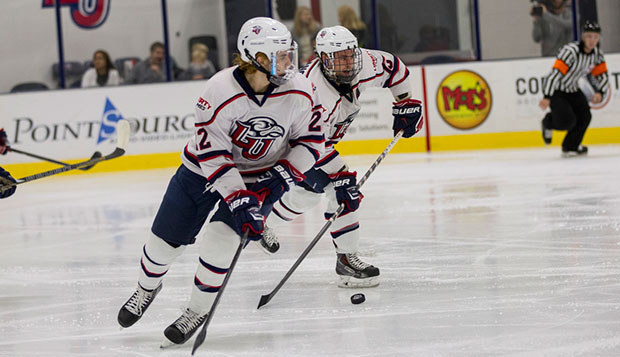 Senior forward Lindsay LeBlanc works the puck beside freshman forward Luke Simon in the Flames rematch with the Naval Academy at the LaHaye Ice Center.

When the Flames' top offensive line of Lindsay LeBlanc, Luke Hannon, and Luke Simon turns from luke-warm to red hot in the LaHaye Ice Center, opposing teams get burned.

All three players finished with a goal and two assists Saturday afternoon and Liberty University's ACHA Division I men's hockey team scorched the Naval Academy's net four times in a five-minute span late in the third period to blow the Midshipmen out of the water, 6-2.

"We were real happy with our play tonight," LeBlanc said. "We were pretty disciplined. Last night, the puck wasn't bouncing our way ... and we felt like we let one slip away. Credit to them for coming back in both games and tying it up. But we retooled and refocused today and we came out in the third and we dominated."

The Flames (4-0-1) exacted a measure of revenge against Navy (1-1), which eliminated them from last season's ACHA National Championships with a 4-3 overtime upset in the second round before rallying from two goals down three times in Friday night's stunning 5-4 shootout setback.

Liberty outgunned Navy 50-33 and took 10 fewer penalties than it did Friday night, when the Flames were called for 17 infractions, leading to a couple power play goals by the Midshipmen.

"We had strong discipline all night and that was huge thing for us," Liberty Head Coach Kirk Handy said. "It was disappointing last night (but) I was very proud of our guys for the way they came back and played this game today."

The Flames stayed out of the penalty box and never lost their edge, closing the contest with an onslaught of goals sparked by Hannon's one-timed turnaround finish with 7:03 left in regulation. Ten minutes after Navy forward Dustin Frawley tied the contest at 2-2 with a slapshot from the top of the right circle off a faceoff won by Matt Harrigan, LeBlanc won a faceoff in the left circle back to Simon. He slipped a pass through the crease to Hannon, who slammed the game-winner home.

Just 30 seconds later, Simon started a sequence of passes that included back-to-back blind backhanders from LeBlanc to Hannon to senior defenseman Cam Bakker, who lifted a wrist shot from a tough angle into the upper right corner of the net to pad the lead to 4-2.

A minute and a half later, freshman forward Colt Steele stole an outlet pass from behind the net by Navy defenseman Doug Swezey and cashed in on a point-blank finish to make it 5-2 before Simon followed a fast-break shot by Hannon for the final score.

"We're trying to preach to our guys to play a patient game," Handy said. "They always want to win it in the first period and we definitely want to be a third-period team and play well all three periods."

Liberty struck first with 2:13 left in the first period when freshman defenseman Ben Hughes sent a pass from center right to senior defenseman Cam Bakker. He fed LeBlanc back between the circles where he threaded a low wrist shot through traffic past Navy goalie Matt Truninger inside the left post.

Midway through the second period, junior forward Danny Logan, who returned from an offseason injury on Friday night, skated across the blue line and unloaded a left-handed torpedo into the lower right corner of the cage for a 2-0 Flames advantage.

However, just like Friday night's contest, Navy fought back, cutting the deficit to 2-1 on an odd-man rush in the final 17.5 seconds of the second period. The Midshipmen cruised through the crease with forward Derek Frawley dishing a crossing pass to Oberlander who lost his stick as he crashed into freshman goalie Josh Halpenny, barely flipping the puck over the back of Halpenny's skate before it trickled across the goal line.

"(We) did a great job once (Navy tied it up) of working hard, not giving up, and battling back," said Halpenny, who had been unscored upon for approximately 120 minutes up to that point and improved to 3-0 in goal. "It was a lot of fun."

Liberty returns to LaHaye next Friday and Saturday for 7 p.m. games against Ithaca College.