Flames gear up for Navy rematch Friday night at LaHaye 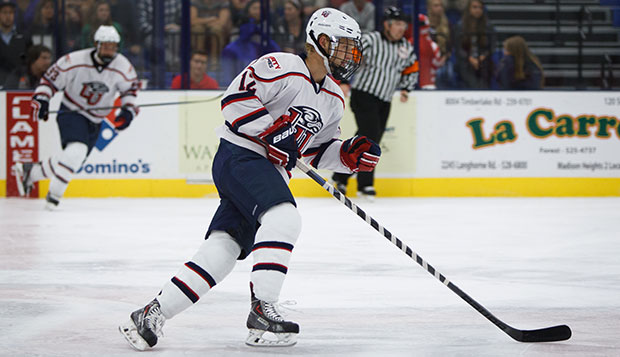 There is perhaps no better offseason motivation for a program than to have the opportunity to host the same team that eliminated it from tournament play in the next season's league opener.

That's the incentive Liberty University's ACHA Division I men's hockey team will have in this weekend's rematches with Navy. In March, Flames (29-6-3), seeded fourth in the ACHA DI National Championships, were left reeling from a second-round 4-3 overtime upset loss to the 13th-seeded Naval Academy, in Newark, Del.

With a reloaded lineup strengthened by top-level recruits, Liberty will welcome the Midshipmen to the LaHaye Ice Center for its first ACHA matchups Friday night and Saturday afternoon.

"We believe we have a team that's going to make a big impact this year on the league and be able to compete night-in and night-out against the top teams in the country," Liberty Head Coach Kirk Handy said.

The Flames were ranked No. 7 in the ACHA DI coaches poll, announced at Wednesday night's ACHA preseason show webcast live by the Liberty Flames Sports Network. That, however, could be a motivational factor in favor of Navy, which was ranked at No. 12.

Liberty Scouting Report: The Flames received balanced scoring in decisive wins over in-state Junior "A" programs from Potomac and Richmond, which they defeated twice. Luke Hannon, younger brother of assistant coach Jake Hannon, made a positive first impression at Liberty, scoring the season's first goal in the opener against the Patriots and totaling three goals and five assists through three games. Fellow freshman forward Luke Simon also made an auspicious debut, tallying four goals and three assists in the three contests.

In goal, freshman Josh Halpenny made a spectacular debut with 32 saves, and was unscored upon in 90 minutes of action. Both he and sophomore goalie Matt Pinel posted shutouts last weekend in 6-0 and 11-0 victories over the Richmond Generals.

Navy Scouting Report: The defending Eastern Collegiate Hockey Association regular-season champion Midshipmen graduated the nucleus of last year's team, which finished 28-7-2 and ranked No. 8 in the ACHA — one spot ahead of Liberty.

Navy lost its starting goalie, team captain, and MVP Andrew Mills, who made 38 saves against the Flames in the ACHA tournament. Also gone is its offensive player of the year Thomas Krysil, who scored two goals against Liberty, including the game-winner in overtime, and finished third in ACHA DI in scoring with 68 points.

Defensive player of the year Conor Kearney, has also shipped out of town, but the Midshipmen return junior defensemen Cole Maetzold, last season's most improved player, and Nick Hermberg, its hardest worker. Navy will look to sophomore forward Matt Harrigan, its rookie of the year, to spark its attack.

All-time series: Liberty is now 1-1 against Navy after winning the teams' first meeting, an 11-7 slugfest in Annapolis, Md., on Feb. 11, 2007, in the Flames' first season competing at the DI level.

Coaches: Handy is in his 15th season as the Flames' head coach, with an overall record of 311-128-15. Mike Fox, now in his eighth season as head coach of the Midshipmen, was a finalist for the ACHA DI Coach of the Year award the past two seasons.