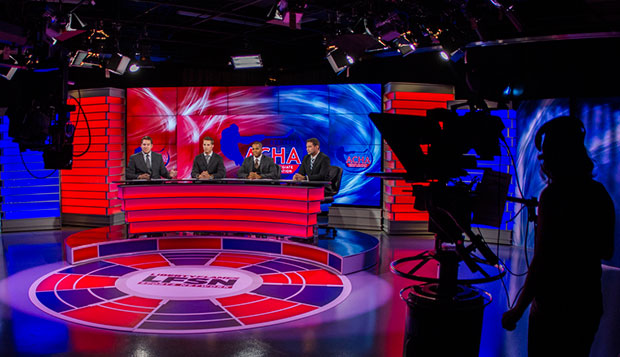 The theme of the hour-long webcast produced by students of Liberty's School of Communication and Creative Arts was "The Journey to the Murdoch Cup," referring to the ACHA DI National Championships in March to be hosted by John Carroll University at Hoover Arena near Cleveland.

The panel projected the top incoming and returning players on teams around the ACHA.

He also spoke with Sean Hogan, first-year head coach at four-time national champion Ohio. Hogan coached at Oakland (Mich.) when the Grizzlies edged Liberty in the ACHA DII national championship game in 2006. Most recently, he coached at Arizona, where the Wildcats ended ASU's 37-game winless streak in the series between the close rivals this past season.

Semenyna later talked to ACHA League Commissioner Brian Moran, who gave an update on the status of the league.

"We're not Division I, NCAA, but we can be better than an NCAA Division III and that's where I'd like to see us," Moran said. "Over the last five years, the (talent level in the league) just keeps getting better and better. Obviously, that's one of the reasons why we've expanded the tournament over the last 10 or 15 years. You've got quality teams, and you want to have a national tournament with the best teams. We're looking forward to keeping that going."

The show concluded with the announcement of the ACHA preseason rankings, determined by the league's coaches until the computer ranking system introduced last year generates its first Top 25 poll in October.

Liberty debuted at No. 7 in the poll, behind the top-ranked Sun Devils, which received all 27 first-place votes, Robert Morris (Ill.), Stony Brook, Oklahoma, Iowa State, and 2013 national champion Minot State. Central Oklahoma was ranked No. 8 followed by Ohio, Adrian, Delaware and 12th-ranked Navy, Liberty's opponent for this Friday night's and Saturday afternoon's ACHA openers at the LaHaye Ice Center.