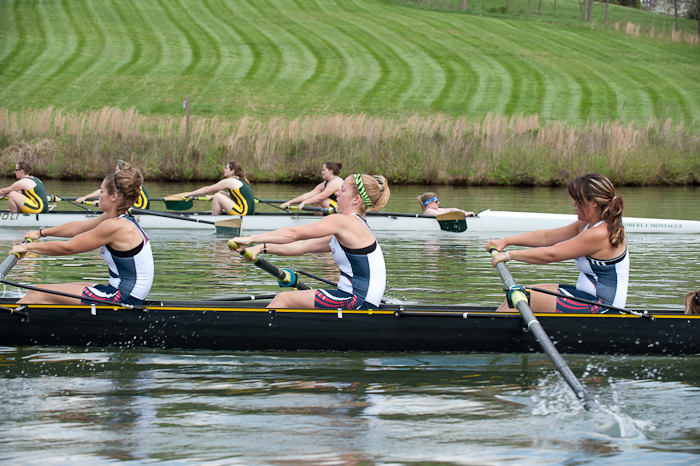 As the slim, yet sturdy man powered boat approaches the finish line first, gasps of air, and cheers seem silent as team members hoist the coxswain — boat navigator — through the air and into the water in celebration of victory.

It took Liberty University 38 years to put together a men's and women's crew team. But the spring of 2009 brought high hopes and a determined coach and team.

"I had rowed in high school and felt like that was the only thing Liberty was lacking for me," former captain Brittany Tedder said.

"I found out that Liberty had no men's swim team," Coombs said. "I was mad at first … I thank God because that allowed me to get into the sport of crew."

Although it is his first coaching position, head coach Mark Furler rowed for Rensselaer Polytechnic Institute and also held other leadership positions throughout his college career.

"My role was making sure the effort was focused and finding resources," Coach Furler said. "This wasn't something you could just post flyers on the walls around campus."

Despite having little publicity and only a handful of students coming to the first meeting, by the end of their first season, the women's team landed a spot at fourth, while the men's team placed second in Head of the South competition in Georgia.

The teams have grown in numbers, and show promise of more eager competitors after each semester. The team has also grown in facilities, with continued progress on Ivy Lake and a boathouse to store their equipment.

"Of the 50 people, two have rowed before coming to Liberty," Furler said. "But the normal for most schools is about 5 percent."

While they prepare for a race, the teams hold nothing back, including a time of prayer.

"We always do our best at regattas to represent Christ with our attitudes so other schools will see Him through us," Tedder said.

The team is extremely unified, despite having members hail locally from Virginia and internationally.

"As soon as I started, it was like coming into a family," women's varsity member Amy McGowan said. "We travel so much, and spend a lot of time together, you get very close very quickly."

Liberty will host its first Regatta on March 26 hoping for more supporters.

"We usually have a couple parents come to away matches … with our first home match we are excited and hope college students come and support us," men's varsity boathouse captain Brent Ausink said.

In mid April, they plan to participate in the Southern Intercollegiate Rowing Association Regatta in Tennessee, and a select few will have the opportunity to travel to Philadelphia for the Dad Vails Regatta the weekend after finals.

"I hope that our shells can medal and show the rapid growth of our team against the other colleges," Coombs said.

"This year we hope to continue to do well and gain respect and recognition for Liberty but ultimately for Christ," Tedder said.