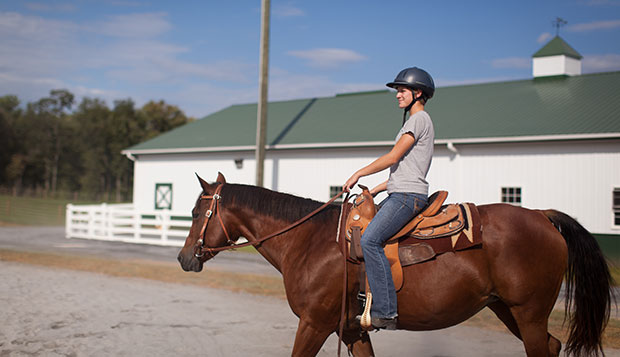 Liberty University's Equestrian Center expanded over the summer, adding a new 20-stall barn that more than doubled its boarding capacity. This fall, the equestrian team is following suit, introducing a Western riding team and more than doubling its number of riders from 17 to 37.

The 25 Hunt Seat riders and 12 Western riders will complete their first month of practices this week. The Western team, competing in Region 3 along with St. Andrews University, Campbell University, Martin Community College, and Virginia Tech, will debut Saturday and Sunday at St. Andrews in Laurinburg, N.C. The Hunt Seat team, now in Region 5 with Averett, Elon, High Point, and Virginia Tech, opens Oct. 4 with a show at Averett.

"Our previous region was an awesome region to be a part of for a new program," second-year Head Coach Caroline Trexler said. "But we hope to be able to really find a home in these new regions, find our place and continue to establish our program."

Lori Matthews is returning for her second season as coach of the Hunt Seat team, while former Virginia Tech Western coach Shelby Rader has been hired to instruct the Western team.

"Both have been absolutely phenomenal," Trexler said. "To start a brand new team again this year and have them show less than a month later is a pretty tall order, but they've been doing an awesome job."

Trexler said Western is similar to Hunt Seat from an equitation standpoint.

"What we're looking for from a Hunt Seat rider and a Western rider is an appropriate riding style including posture, commands, and cues which although similar, are manifested differently," she said.  "Western, which involves horsemanship and reining patterns of combined movements, is a different style of riding than Hunt Seat equitation, where riders show on the flat and over fences."

The two teams will be showing about equally, with four Western and five Hunt Seat shows this fall and a similar number in the spring. Liberty will co-host a show in North Carolina next semester, providing staff and some of the26 university-owned horses.

Trexler has seen rapid improvement in the program and the development of individual riders since equestrian became the 32nd Club Sport last summer.

"We're so excited," she said. "Last year was such an awesome learning opportunity. This year, we're excited to keep pushing forward with everything that we've learned and strive to be even more competitive."