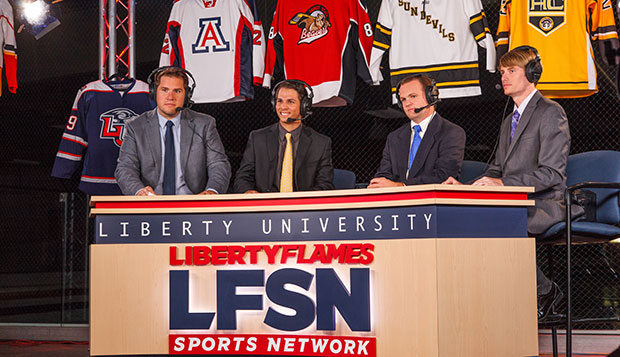 The American Collegiate Hockey Association (ACHA) Division I men's hockey season gets back in full swing this weekend, with Liberty University hosting the Naval Academy on Friday night and Saturday afternoon at the LaHaye Ice Center.

To get Flames fans fired up for the ACHA season, the Liberty Flames Sports Network (LFSN) will host its second annual ACHA preseason show from 8-9 p.m. Wednesday, live from the LFSN studio.

LFSN broadcasters Patrick Strawn, Rett McGibbon, Brandon Cockburn, and Dave Semenyna will discuss the upcoming year in hockey and all the storylines surrounding it — from the newly redesigned ACHA website to early season predictions, as well as unveiling the preseason poll.

The show will include an in-depth look at the conferences and highlight new coaches and standout recruits. League commissioner Brian Moran will join the crew for an interview, as will various coaches, giving ACHA hockey fans an inside look at their teams.

Viewers can tune into the show by following LFSN's live webcast.