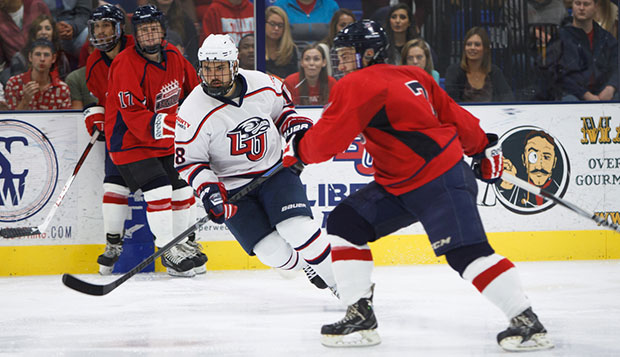 Freshman goalie Josh Halpenny remained unscored upon in two games and recorded his first shutout for the Flames in a commanding 11-0 conquest of the Generals.

"It was good for both of us," Halpenny said of him and sophomore goalie Matt Pinel, who blanked the Generals on Friday. "(Defense) executed great, keeping guys to the outside, making sure no one could get to the rebounds."

"We believe in Matt and Josh," Liberty Head Coach Kirk Handy said. "They're both excellent goalies. The nice part is they're pushing each other, day-in and day-out at practice. They've worked hard and they deserve what they've done so far."

Senior forward Ryan Kerr, who scored two of the Flames' first three goals in Friday's 6-0 win, took just 25 seconds to put Liberty on the board in Saturday's rematch, finishing an assist from freshman forward Colt Steele. Less than six minutes later, Luke Simon followed a shot by fellow freshman Luke Hannon, chipping the puck past Richmond goalie Max Barr from a tough angle on the left side of the cage.

"Overall, we played a good first period except for the penalties we took," Handy said. "Our penalty kill was exceptional tonight, Kerr, and (Christian) Garland, and (Cam) Bakker, (Peter) Shantz, (Matt) Sherry, (Steven) Bellew, (Colt) Steele, (Kyle) Garcia, (Tyson) Street, guys like that played a lot tonight and did a great job for us on the penalty kill, especially five-on-three."

Kerr later helped set up the Flames' seventh goal by making a steal along the board near his own blue line and making a quick outlet pass to Garland to ignite a shorthanded fast break. Garland spotted Sherry in the right crease, where he quickly put away his second goal for the second time in three games.

In the second minute of the second period, back-to-back goals by freshman defensemen Ben Hughes and Sherry just 13 seconds apart on shots from near the blue line doubled the Flames' advantage to 4-0.

With the Flames on a four-on-three power play midway through the second period, Simon gathered a rebound of a shot by senior forward Lindsay LeBlanc behind the left side of the net. Simon then set up Hannon for a point-blank putaway from deep in the left crease, pushing the edge to 5-0.

Sophomore forward Grant Garvin capitalized on a power play a minute and a half later, scoring from a difficult angle from the left side off an assist from Sherry.

After Sherry's second score, Simon netted his second goal, slamming home a short-range shot from center set up by Hannon for an 8-0 advantage.

"The second period was a very strong period for us," Handy said. "We outshot them 23-4. It was nice for us to play a good game today, a solid 60 minutes of hockey."

For the contest, Liberty outshot the Generals, 51-20.

Early in the third period, Hannon was called for boarding, but Liberty converted another shorthanded score when junior forward Garcia skated past two Generals defenders left to right in front of the cage and fired a shot from the right crease through traffic in front of the net created by LeBlanc.

Less than three minutes later, senior defenseman Bakker received a feed from Hannon and stretched the Flames' lead to 10-0 on a power play.

Junior defenseman Kyle Miller completed the scoring by making a steal in front of Richmond replacement goalie Dvein Cheifetz, who came out to try to clear a loose puck, and promptly putting it away into the open net.

"All the guys are clicking a lot more than they were at the start of the first game, so it's good to set us up for Navy next week," Halpenny said. "We should be a team that can compete with anyone so I'm really looking forward to it. It should be a lot of fun."

Liberty Flames Sports Network will webcast an hour-long ACHA Preseason Show live at 8 p.m. on Wednesday, announcing the first Division I poll before Liberty's ACHA openers next Friday and Saturday against Navy, which will be streamed live by LFSN on ESPN3.

The Midshipmen ended the Flames' season in the second round of the ACHA DI National Championships last March.