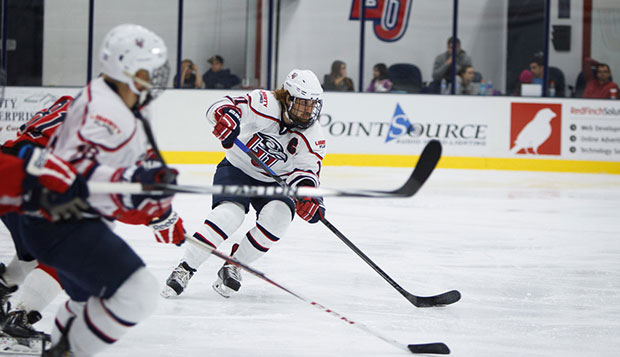 Liberty senior team captain Matt Sherry works the puck out of the defensive zone during Friday night's 6-0 shutout of the Richmond Generals' Junior 'A' squad at the LaHaye Ice Center.

Implementing a new offensive system hasn't always been smooth skating for Liberty University's ACHA Division I men's hockey team. In their second exhibition test, Friday night against the Richmond Generals Junior "A" team, the Flames started slowly, as they did in last week's season opener against the Potomac Patriots' Junior "A" team.

It was only a matter of time before Liberty found its offensive rhythm and it finished with a flurry, scoring three third-period goals in a commanding 6-0 victory over the Generals in front of another large crowd at the LaHaye Ice Center.

"Right now, we're just trying to get the little details ironed out," Flames senior forward Ryan Kerr said of the new system. "It's a very team-oriented system. Basically, it's a lot higher pressure, kind of like basketball with the full-court press. We've got a really fast, smart team."

"It's not going to happen overnight," Liberty Head Coach Kirk Handy added. "We're going to have to be patient with it. We believe in our team, we believe in the guys in there, and we're excited to see how our team progresses."

Junior forward Bram Erickson sparked the third-period outburst, applying a check that forced a turnover against the offensive boards before putting back the rebound of a spinning shot by freshman forward Grant Garvin with 16:45 to go.

Four minutes later, after Luke Simon won a faceoff in the left circle, fellow freshman forward Luke Hannon received a feed from freshman defenseman Ben Hughes and threaded a shot from in the left crease past Richmond goalie Kian Kemp. Two minutes after that, senior forward Ryley Egan capped the scoring by cleaning up a point-blank shot by Garvin with a nifty backhanded shot over Kemp.

Kerr started the scoring with 10:39 left in the first period, receiving a short pass from fellow senior forward Christian Garland down the center of the ice on transition and beating Kemp one-on-one by shifting the puck to the right and finishing a quick backhanded shot into the upper netting.

Just 22 seconds later, the Flames extended the lead to 2-0 by capitalizing on their first power play when senior forward Lindsay LeBlanc stole the puck away from Kemp, who was attempting to cover it up, and tipped it to freshman forward Luke Simon, who slammed it into the back of the net from deep in the left crease.

Richmond's defense stiffened, killing four consecutive Liberty power plays through end of the second period. But the Flames extended their advantage to 3-0 at even strength. After an excellent outlet from senior defenseman Matt Sherry to Garland, Kerr took a crisp crossing pass and added his second goal of the game just under the 13:00 mark of the second period. He followed up his own miss by ricocheting the rebound from behind the cage off the skate of Generals forward Brian Leonard inside the right post.

"I went for it behind the net and kind of backhanded it out front," Kerr said. "It reminded me of Rick Turner. He used to do that all of the time. Just try to throw it out front, off the defender or off the goalie, and see what happens."

Defensively, the Flames only allowed the Generals to generate eight shots on goal, and sophomore goalie Matt Pinel faced few serious challenges in posting the shutout.

"We have to tighten up our own end a little more, but overall, it wasn't bad," Handy said. "I think we could be a little more physical and establish ourselves on the forecheck a little more earlier on in the game, which will help."

Liberty and Richmond face a quick turnaround with a rematch Saturday at 3 p.m. at LaHaye, prior to the second game between the Flames' DII team and the Generals' Junior "B" team at 6 p.m.