Flames pull past Patriots in front of sellout crowd at LaHaye 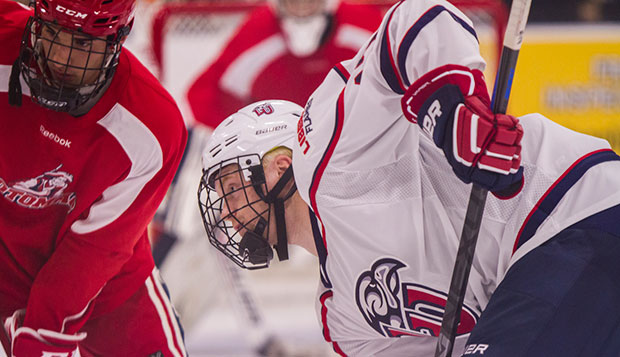 Flames sophomore forward Grant Garvin is fully focused before a faceoff with the Potomac Patriots in the first period of Friday's season-opening 7-2 victory at the LaHaye Ice Center.

A sellout crowd of Flames fans in the LaHaye Ice Center spurred Liberty University's ACHA Division I men's hockey team on to a 7-2 triumph over the Potomac Patriots' Junior A team in Friday night's season opener.

"It was great," said senior defenseman and team captain Matt Sherry, who scored Liberty's sixth goal off assists from freshmen forwards Luke Hannon and Luke Simon. "We had a full house, and it was exciting for the new guys who had never played in front of a crowd like that before. It was a great atmosphere to play in and easy to get up for the game."

Liberty used the crowd's intimidation factor to its favor, outshooting the Patriots 23-4 in the first period and 62-22 for the game.

"It was a really exciting night," Flames Head Coach Kirk Handy said. "It was an awesome crowd."

"It felt great to set the tone for the season and get the first goal for the team," Hannon said. "God really surpassed my expectations."

He received the first of three assists from senior forward Lindsay LeBlanc, stationed behind the left side of the net, and fired a shot from directly in front of the net that deflected past Patriots goalie Dustyn Moyer.

"(LeBlanc) made a really nice pass," said Hannon, who was nominated by Sherry for the season's first Hardhat Award for going to battle for the team. "He's got a lot of grit for the game. He's great down low with the puck and his vision is amazing. It's great to be able to play with a guy of his caliber. He's an all-around guy. He's not afraid to mix it up. He's a very versatile player."

After receiving an outlet pass from sophomore forward Grant Garvin, senior forward Ryley Egan pushed the lead to 2-0 with a power-play score on a shot from the high slot, assisted by defensemen Chase Harris and Sherry. But Potomac cut it to 2-1 on a counter-attack less than 40 seconds later when Joshua Musty converted a left-handed shot on a one-on-one with Liberty starting goalie Matt Pinel.

Senior defenseman Cam Bakker extended the Flames' edge to 3-1 five minutes into the second period by tucking a nifty feed by LeBlanc from along the back right boards from deep in the right crease. Once again, Potomac struck back just 35 seconds later when forward Nick Gray finished a breakaway opportunity while falling down, lifting a shot into the upper netting past Pinel.

"We're playing with a new system and it's going to take some time to implement it," Handy said. "We were on a rollercoaster through the first two periods. The team played up and down. We had a good start and let them back in it. We're going to have to develop our system and to refine it to have consistency in our play."

LeBlanc was flipped by a hip check from Patriots forward Kory Medeiros, sparking a mid-ice scuffle that led to several penalties and left Liberty on another power play.

"It was a little chippy game," Handy said.

After Gray was denied by backup goalie Josh Halpenny on another breakaway chance, the Flames capitalized on another score set up by LeBlanc. With 57 seconds left in the second period, Egan sent a short assist to Sherry from deep in the right crease for a chip shot and 4-2 lead.

Early in the third, after Potomac defenseman Michael Addison made a steal but had his one-on-one backhanded shot blocked by Halpenny, Simon put away a pass from Hannon from close range to make it 5-2.

After Sherry's second score, freshman defenseman Ben Hughes capped the scoring with his first score as a Flame off assists from Egan and Garvin.

"Luke Simon's skillset is one of the best in the ACHA," Hannon said. "We're really fortunate to have him in the program. He's going to do great things on and off the ice."

Liberty will host the Richmond Generals' Junior "A" team next Friday at 7 p.m. and Saturday at 3 p.m. at LaHaye. 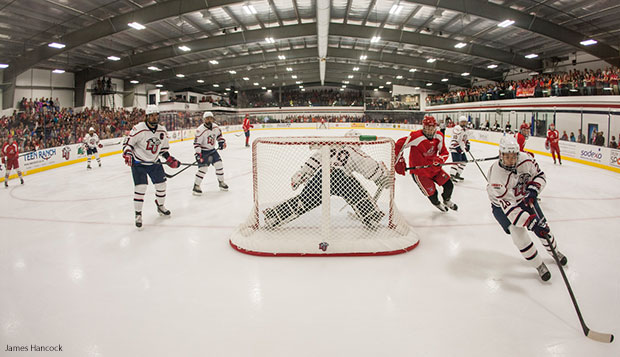