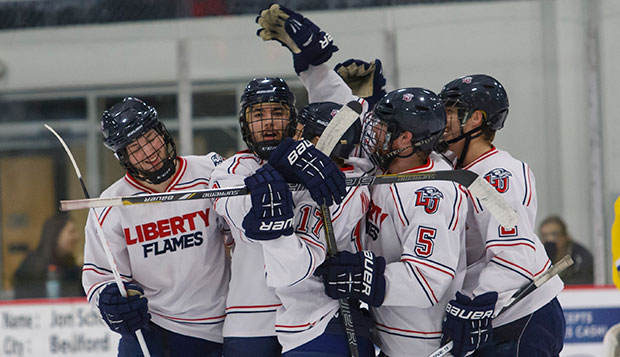 Perhaps not since the 2005-06 season — the year Liberty University's ACHA Division II men's hockey team advanced to the national championship game before moving up to the DI level — have the DII Flames returned as much talent at every position as they do this fall.

Liberty will look to defend its Mid-Atlantic Collegiate Hockey regular-season conference championship and return to nationals with a deep, experience-rich lineup.

"We're excited to get going on Friday night," Liberty seventh-year Head Coach Chris Lowes said. "We definitely want to build on the success we had last year and we've adjusted our goals accordingly. We'll be setting little goals to accomplish the big one," winning a program-first national championship.

Last March, in the ACHA DII National Championships in Massachusetts, Liberty upset Grand Valley State and dominated Northern Arizona in the first two rounds of pool play only to lose to eventual champion New Hampshire in the third round and narrowly miss the Final Four.

"Ideally, we would like to be ranked in the top two (in the final Southeast Region poll) and receive an automatic bid to nationals," Lowes said. "Otherwise, we'll need to be prepared to battle at regionals, where the Nos. 3 through 10 teams fight for those final two spots."

Liberty will be battle-tested by the time regionals roll around, with three games against Virginia Tech and five against Florida Gulf Coast (FGCU), which was ranked No. 1 for most of last season when it won three of four meetings with the Flames. Liberty will host the Hokies, Miami of Ohio (which it beat to clinch its national bid last year at LaHaye), and FGCU at a Showcase Tournament on Oct. 11-13.

On offense, Liberty returns junior forwards Peter Kazmierczak (who moved up to the DI team midseason last year) and Paul Ingles (who played DI as a freshman) and adds Caleb Grow, a graduate student, on loaded lines that should find regular success in putting the puck in the net. The attack includes seniors Jeff Boschman and Johnny Cotton, juniors Josh King, Erik Burke, and Jeremy Miller, and sophomores Devon Docksteader, Jordan Barstead, Ben Freymond, Bannon Lynott, and Kade McDaniel, who was promoted from the DIII squad. Lowes also expects freshmen Connor Sheehey and Tim Bierema — who is coming off a prolific Junior career in Ontario — to contribute right away.

"We returned the nucleus of our team and there's going to be a lot of guys who have the ability to step up and have big years for us," Lowes said.

Defensively, the Flames picked up senior Jackson Kuhn, who has a wealth of collegiate hockey experience, as well as returning seniors Lucas Ebel and Clinton Nigh and sophomores Daniel Huntington, Ryan Sidun, and Roger Roulette — who was injured for much of his freshman season. They also welcome sophomores James Thayer and Adam Gnatowski, who played together on a Junior team in Maryland last year.

In goal, Liberty seniors Cary Byron and Justin Gortman will be challenged for playing time by freshman Connor Carew.

"The talent at goalkeeper is amazing," Lowes said. "We've had a real good battle for spots on the DII and DIII teams. It's a good problem to have in the program."