Flames sharpen one another, prepare for run at national title 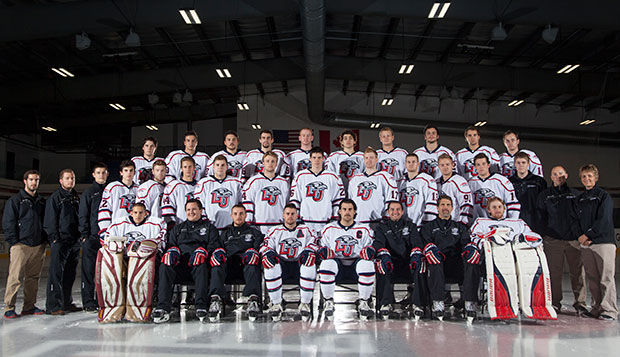 Competition breeds success. That's why Liberty University ACHA Division I men's hockey Head Coach Kirk Handy has fostered a healthy spirit of competition in preseason practices at the LaHaye Ice Center — to motivate the Flames to bring out their best on the ice.

"These guys are used to playing," he added. "They aren't going to want to sit. That's going to be key for us, to see them push each other and see how good this team can be."

"We have a ton of depth this year throughout all four lines and through all of our defensive pairings," senior defenseman and team captain Matt Sherry said. "That's something that is special about our team. Every line is going to contribute in their own unique way, whether it's putting the puck in the net or shutting other lines down or on special teams."

Newcomers to the team, many with years of Junior-level experience, have stoked the competitive fire within the Flames. Sophomore Grant Garvin spent last season at Holy Cross, an NCAA Division I program.

"It's different here and there, but it's the same intensity," said Garvin, a 6-foot, 3-inch, 205-pound forward. "These guys are working hard. I'm looking forward to the season. We have a lot of talent on this team ... a lot of smart hockey players … a lot of speed."

Liberty's lineup has relied on speed in recent seasons, but this year's squad features a rare blend of speed, size, skill, and strength.

"We've always been a fast team but to have a big and a fast team is a rare thing," said Sherry, who's Liberty's largest player at 6-1, 220 pounds.

Senior forward and alternate captain Lindsay LeBlanc, who's 5-9 and has bulked up to 185 pounds over the summer, was Liberty's leading scorer in 2013-14 with 26 goals and 32 assists. He netted dramatic, game-tying goals in back-to-back overtime wins over 2012 ACHA national champion Delaware and 2014 semifinalist Stony Brook.

Handy expects the competition within the team to give the Flames a competitive edge for Friday's season-opener against the Potomac Patriots Junior "A" team, starting at 7 p.m. at LaHaye, and throughout the ACHA DI season, including its league openers Sept. 19-20 at home against Navy. The Midshipmen ended Liberty's season in the second round of last year's National Championships.

"Every game's important to us, whether it's the first one or the last one," Handy said. "I really feel we're motivated by what happened at the end of last year to make sure that we're at the top of our game each and every night. League parity is very even and the level of competition is very strong and each night you have to be at your best and if you aren't, you're going to get beat by a team that's playing a little better than you are. So to raise our level every night is going to be a big thing for us."

The Flames, one of six independent ACHA DI teams, will certainly be tested throughout the ACHA season, including a two-week stretch when they face three of the past four DI National Champions — at independent Minot State (N.D.), Oct. 10-11; Davenport, in the first two games of the Blue and Gray Cup, Oct. 17-18 at LaHaye; and at defending national champion Arizona State on Oct. 23.

"Our main goal is, obviously, to win a national championship this year," Sherry said. "Throughout the lineup, we have guys with the tools to do it. It's just putting it all together. Last year, we started a mentality were we put our work in, getting up at 5 a.m., establishing a mentality for competitiveness and hard work. The biggest thing we're focusing on this year is details and executing those details on the ice every week. It doesn't matter who we're playing."

Liberty, which rose as high as No. 3 in last season's ACHA polls, will find out where it ranks to start the year during the Sept. 17 ACHA Preseason Show, produced live by Liberty Flames Sports Network (LFSN).