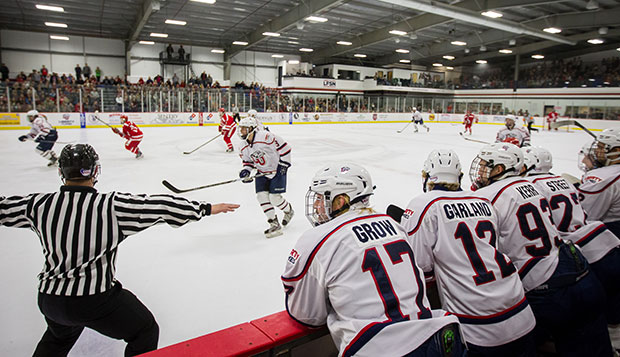 Just days before its opener against the Potomac Patriots Junior A team, Friday at 7 p.m. at the LaHaye Ice Center, Liberty University's ACHA Division I men's hockey team is eager to start the 2014 season off on the right note.

After a strong 2013-14 campaign that ended in a dissatisfying overtime loss to Navy — the fourth time in five years Liberty has been knocked out of ACHA DI National Championships in just the second round — coaches and players alike are set on going further this year.

A roster of veteran players and older, experienced recruits gives the Flames the mental edge necessary to capitalize on their physical strengths.

"We have older freshmen and some great returning leadership," Head Coach Kirk Handy said. "I think we'll be able to score a lot of goals this year, and I think we got stronger on the back end, too — we added some size."

Team captain Matt Sherry and alternate captain Lindsay LeBlanc both echoed Handy, noting the team's rare combination of size and speed as a major advantage. The key to national-level success, though, is implementing that strength game in and game out.

"The biggest thing, I think, is not getting ahead of ourselves," Sherry said. "Every game counts, especially since we're independent … so one game at a time."

"We're focused on being consistent," freshman forward Ben Hughes added. "Being consistent …  and always sticking to our game plan, every game of the season."

That's easier said than done, considering those games include matchups with the past four ACHA DI national champions (Minot State University, Arizona State University, Davenport University, and the University of Delaware) among other tough rivals. The Flames are up for the challenge, though, and eager to be back on the ice.

"I feel great, I really like our team," Handy said. "We're excited about the prospect of us having a really successful year."