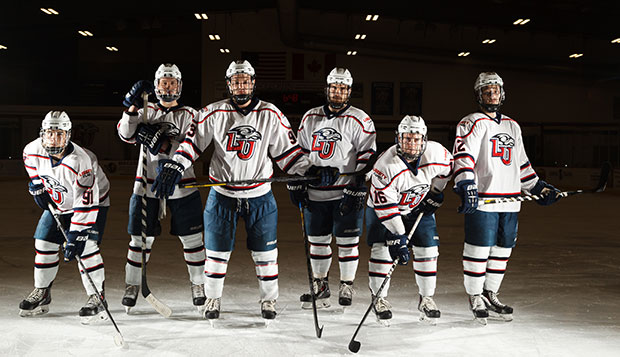 It's hard to find a weakness on Liberty University's ACHA Division I men's hockey team this year.

The Flames feature a rare blend of speed and size, power and athleticism, veteran maturity and youthful exuberance, which was on display during Wednesday afternoon's Media Day at the LaHaye Ice Center.

Perhaps Liberty's greatest strength is in its leadership across the board, not only from its two captains — senior defenseman Matt Sherry and senior forward Lindsay LeBlanc, who was designated as Sherry's alternate last week — but even among its incoming freshmen.

"The unique thing about our team this year is the letter (A or C) on the jersey doesn't really indicate anything," Sherry said. "There are so many leaders in there, so it makes it easy."

"We have an older group this year, so it doesn't come down to me or Matt," LeBlanc added. "It's all about the team."

Most of the incoming recruits have played a few seasons of Junior-level amateur hockey and arrive at Liberty in their early-20s rather than in their late-teens.

"Some of the older guys we have are freshmen, who will be a huge stabilizing influence … even though they're first-year players here for us," Flames Head Coach Kirk Handy said. "They've lived life for three or four more years so that gives them a little bit more wisdom when they're talking to 19, 20-year-old players on our team."

"They're solid players and we're excited to see how they progress as part of our leadership corps, to be there with the veterans that we have in our lineup," Handy said. "Luke Hannon's been a solid guy coming in here and really a calming influence on some of the other younger guys to just be excited about playing, but not be overly excited to where it's going to have a negative impact on your game."

The Flames will look to their captains — Sherry, Liberty's anchor on defense, and LeBlanc, its leading scorer last season (26 goals, 32 assists) — for steady leadership on both ends of the ice.

"It all starts with Matt Sherry," Handy said. "Matt's a great leader and Lindsay's a great leader as well. Obviously, you watch those guys play and you never question their effort or their energy so we're excited. As other guys see that and follow along with that, it's going to be a great success for us."

LeBlanc, who cut his penalty minutes in half last season from the year before (when he spent a team-high 95 minutes in the box), changed his approach to the game after a conversation with the Flames' coaching staff.

"We asked ‘What kind of a player do you want to be? You can be a top forward for us and we need you to play like that,'" Handy said. "He's had to refine his game, for sure, but he's gotten better. His offensive side has really flourished for us."

This season, LeBlanc will play on the same line as incoming freshmen Hannon and Luke Simon.

"He's going to start with Luke and Luke, so we're definitely excited about that," Handy said. "It'll be an explosive line for us."

Sherry and LeBlanc, who spent the summer in Lynchburg training under the Flames' strength coach Joe Orlandi, have already made a positive impact on their new teammates.

"Matt's our team captain. Whatever he says goes. I'm 100 percent loyal to him," LeBlanc said. "I'm out here to push players so my work ethic better be their work ethic, especially for some of these younger guys coming in. There's a level of professionalism, there's a standard here that we want all our guys to be reaching, just by getting better on a day-to-day basis.

"We have something going there and we're all excited about it," he added. "We brought guys in for specific reasons. I just look to lead by example day to day and set the tone for the guys and help this team win a national championship. That's our main goal, that's our focus this year, and that's what we're going to do."