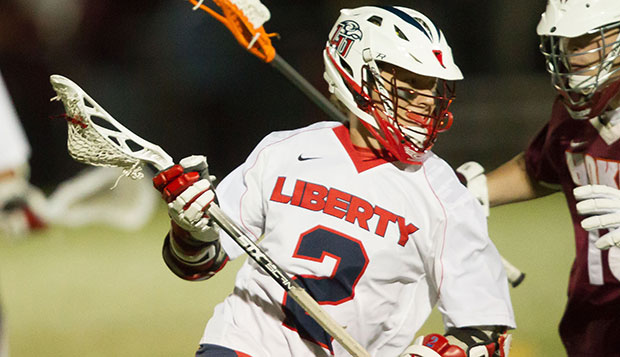 Liberty attackman Ryan Miller, who ranked fourth in MCLA Division I with 58 goals last season, battles against a Virginia Tech defender in the regular-season finale on April 18.

Liberty University's men's lacrosse team will host two of its closest rivals in the SouthEastern Lacrosse Conference (SELC) and one of its closest neighbors in the Liberty Fall Tournament on Oct. 18.

In the one-day, round-robin event at the Liberty Lacrosse Fields, the Flames will face Randolph College, an NCAA Division III program also from Lynchburg, Va., as well as MCLA Division I foes North Carolina State and Virginia Tech.

The tournament, which could run from 9 a.m. to 5 p.m., will include six games with 20-minute running halves. Only one field will be used and no team will play back-to-back games without a break in between.

"It's a good opportunity for us to get in a lot of lacrosse in a short amount of time," Liberty Head Coach Kyle McQuillan said. "It will be good to see who we have and see what the freshmen and transfers are like in game situations."

The three opponents will provide high-level competition for the Flames in preparation for their Spring 2015 schedule, which includes five teams in the top 15 and was ranked among the most challenging in the MCLA. Among those top-tier opponents is MCLA National Championship runner-up Arizona State.

"We've played DIII teams in the past, but this will be the first time we've ever played Randolph, which takes lacrosse seriously and is very comparable to the teams we play (in the SELC)," McQuillan said. "We're excited to have a chance to play a team that's close to home."

He said next fall, an all-local tournament with Liberty, Randolph, and Lynchburg College, could be in the works.

The Flames rallied from behind to edge the Wolfpack in last spring's "Blackout" game held at midnight. They then defeated the Hokies in the regular-season finale to clinch the SELC NorthWest Region title before losing the rematch with the Hokies in the championship game of the SELC Tournament.

"N.C. State made the playoffs last year and Virginia Tech's a good measuring stick, as defending SELC champions," McQuillan said. "It will be a good opportunity to pick up where we left off last season."

Liberty ended the year ranked 21st in the nation, narrowly missing an at-large bid to the MCLA Division I National Championships in its first season since moving up from the DII level, where it finished ranked third in 2013 after reaching the MCLA DII Final Four.

Next spring, the Flames will again challenge Virginia Tech in the regular-season finale, April 17 in Blacksburg.

Next week, the Flames will hold tryouts from 3:30 to 5:30 p.m. Monday, Tuesday, and Wednesday on the Liberty Lacrosse Fields.

"We had six guys graduate and lost a couple more, but we bring back 20 athletes and we've got upwards of 30 kids so far we know are definitely coming, including a large group of freshmen who have been recruited," McQuillan said. "In the last four years of open walk-on tryouts, we're always surprised by one or two kids who show up that we don't know anything about and turn out to be great lacrosse players."