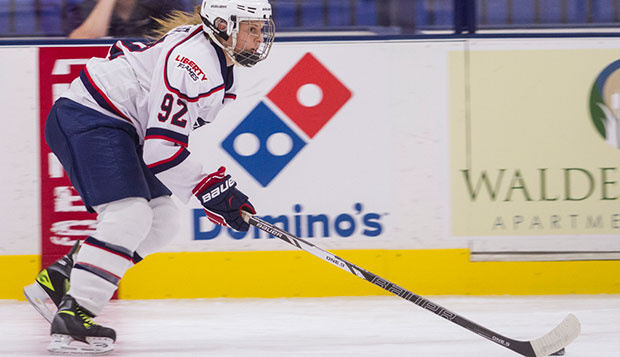 Liberty sophomore Courtney Gilmour, who was recruited from the Hamilton (Ontario) Hawks last year, skates against her former team during Saturday's exhibition game at the LaHaye Ice Center.

With the regular-season opener still more than a month away, Liberty University's ACHA Division I women's hockey team got an early preseason tune-up Saturday afternoon in an exhibition against the Hamilton (Ontario) Midget AA Hawks at the LaHaye Ice Center.

"We used it to kind of shake off the cobwebs, get rid of the rust and get ready for the regular season," said junior forward Carrie Jickling, who scored the last two goals and assisted the first in a 6-0 shutout.

"We've got some potential this year," Liberty Head Coach Paul Bloomfield said. "Once we get everybody back and healthy, we should be able to run four lines — two really good lines, and one grinder, and one stopper line. I'm excited. I feel good about the team. I think we're in good shape. Obviously, conditioning is key and this is a big game for us to get everybody headed in the same direction."

"That whole line was very productive and we saw that right off the bat," Bloomfield said, noting senior Sarah Stevenson, freshman C.J. Tipping, and sophomore Marissa Graham likely will form the top line.

"We had a lot of chemistry and (Gilmour) works hard, too," Jickling said. "She's a good digger. The three of us work really well together."

Burrell netted the first two goals, finishing the first off a feed from Jickling and the second on a power play set up by Tipping and senior defenseman Madi Fischer.

"I just came in across the zone and she called for it," Jickling said of Burrell. "There were a couple girls between us and I just waited for them to shift over to my side and she was wide open. So I hit her with a pass and she deked around the defenseman and scored."

After freshman defenseman Alexis Alexopoulas scored off an assist from Burrell, pushing Liberty's lead to 3-0 in the final three minutes of the first period, senior Jenny McArthur capitalized on a run from the defensive end set up by Graham and Stevenson.

"(Alexopoulas is) a solid defenseman," Jickling said. "She's got good hands and good speed so that will help us a lot on the back end. She can be effective on offense, too. (MacArthur is) like a two-way player, she plays defense and does a good job. That helps having people like that."

"We'll start Chantal, she's our senior, or whoever's ready to play," Bloomfield said. "Our defense was standing in there pretty good. They did their job."

Jickling is hopeful Liberty can get out to a faster start this season, carrying over some of the momentum it built at the end of the year, when the Lady Flames finished third in the ACHA DI National Championships.

"Last year, at the beginning, we had a rough start, which was pretty discouraging," she said. "But we finished so well at nationals and ended on a positive instead of a negative note. There's always, obviously, room for improvement. (But) there's lots of depths of talent on this team and we have a pretty strong freshman class coming in, so it opens up lots of opportunities on the ice."

Liberty hosts the Washington Pride in two more exhibition games on Sept. 27 and 28 before opening ACHA regular-season play Oct. 3-4 (Homecoming Weekend) against the University of Massachusetts, which defeated the Lady Flames in round robin play at the national tournament in March.

"That's going to be a good matchup," Jickling said. "They have a big and fast team. We always seem to have a good rivalry."

The Lady Flames will then fly to Colorado to play four games against Colorado (Oct. 8-9) and Colorado State (Oct. 11-12).