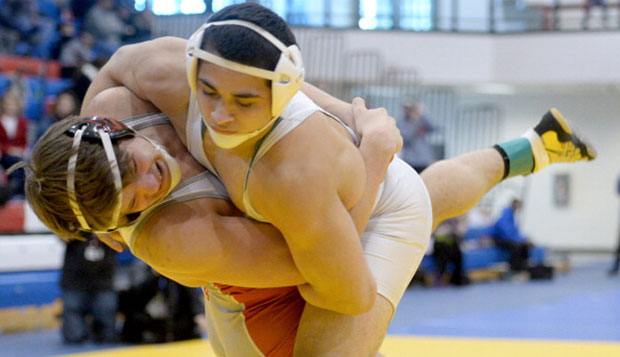 Josh Llopez, a three-time Maryland state champion ranked as high as fifth in the nation as a senior at St. Mary's Ryken, will continue his career at Liberty despite being offered a scholarship to the University of Maryland.

Meanwhile, Josh Llopez, a 165-pound three-time state champion from Maryland, has a similar background as Flames sophomore Ryan Diehl, the defending NCWA champion at 133 pounds. Both were offered NCAA Division I scholarships to the University of Maryland before opting to compete at Liberty, which has offered a Club Sports program for the past three seasons.

As a senior, Llopez was ranked fifth in the nation in his weight class by flowrestling.com, losing only to the nation's third-ranked wrestler in the Maryland state final. Flames Head Coach Jesse Castro said the two newcomers should help keep Liberty in the hunt for an NCWA national championship after finishing runner-up last season and third in 2012 and 2013.

"Those kids, even as an NCAA DI program, we would have fought to recruit," Castro said. "They're big-time wrestlers at the national level."

Bryant mastered upper-body maneuvers through Greco-Roman wrestling, which doesn't allow competitors to use their legs in takedowns.

"He's a very technical wrestler," Castro said. "He's very good on his feet, which makes him very dangerous, and I'm really looking forward to him developing on into a well-rounded wrestler."

Thompson, who is now an assistant athletic director at Purdue University Calumet (Ind.), also arrived at Liberty as a 157-pounder before bumping up to 197 pounds as a sophomore and remaining there for the rest of his career.

"I don't anticipate Michael will bulk up that much," Castro said. "He doesn't have the height that Aaron does."

Bryant should provide an excellent sparring partner for Liberty senior Chase Boontjer, the Mid-Atlantic Conference wrestler of the year, and sophomore Josh Ferenczy.

"They're definitely going to be sharpening each other," Castro said. "Bryant is a great kid and he came here for the right reasons."

The same is true of Llopez, who gives glory to God for all of his accomplishments on the mat.

"We're here to praise him and that's all I really want to do with my talents," Llopez told Southern Maryland Newspapers Online after he transferred from La Plata High School to the private school St. Mary's Ryken before his junior year. "I don't do it for myself or anybody else. I do it because God has given me the athletic ability to wrestle. Without God, I wouldn't have the opportunities I have, the talents I have or the support system that I have to make it through this journey."

He has the same mentality on the mat as the apostle Paul exhorts Christians to have in I Corinthians 9:24, which describes a runner competing for the prize and not settling for second best.

"I have the mindset that I'm not going to lose," Llopez said. "I believe in my talent and my training and that God will help me to beat any opponent and if I lose, I go back to the drawing board to find out a way to beat that opponent the next time."

Llopez, who will live in Lynchburg but take online classes, has two cousins at Liberty who recommended he enroll at the world's largest Christian university.

He plans to study elementary education and remain in athletics after college.

"I want to be a teacher because I want to be able to coach, to reach kids at a young age," Llopez said. "My ultimate goal is to be a college coach."

He is excited to pick up on-the-mat training tips from Castro.

"Coach Castro is an amazing coach and I'll learn from him and that's how I'll lead others," Llopez said.