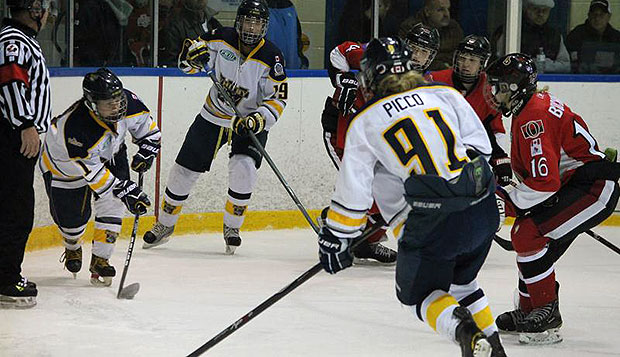 C.J. Tipping (left) is a two-way defenseman who will bolster a back line that graduated Courtney Fischer.

Liberty University's ACHA Division I (DI) women's hockey team will kick off the 2014-15 season in a mere four weeks aiming to improve on its third-place ACHA DI Nationals finish last season and runner-up showing in 2013.

With that goal in mind, filling the gaps left behind by the recent graduation of three key contributors — defenseman Courtney Fischer and forwards Laura Del Monte and Nikki McCombe — is a priority for the Lady Flames.

Take Ontario native Tipping, who found out about Liberty through a hockey tournament and fell in love with the school at a subsequent College For A Weekend (CFAW) event.

"She is a very versatile, hard-working player," Bloomfield said. "[She] sees the ice well, is a physical player, has good hands and isn't afraid to get in the mix and go to the net."

In fact, it is in the mix that Tipping says she shines.

"I like to get in the corners with everyone and stir the pot a little bit, get on people's anger side," she said with a grin.

Greenwood, a forward who's also from Ontario, shares a similar playing style. The self-proclaimed playmaker may only be 5-feet, 1-inch tall, but she uses her small stature to her advantage in big ways.

"Because I'm small, I'm not afraid to go in the corners and muck it up or whatever," Greenwood said.

"She's not afraid to go to the net or grind it out in the corner," Bloomfield echoed. "She plays with everything she has and more."

Schlosser, in contrast, prefers to leave the instigation to others. She aims to up her aggression and offensive production in her first year at Liberty, but the defenseman out of Alberta thrives in the execution aspects of the game.

"She played in the AAA leagues in Western Canada, which produces good hockey players," Bloomfield said. "She plays excellent stay-at-home defense and is a team player… I am expecting Shelby to be a dynamic part of our team once she gets here and finds her spot."

Innes is another newcomer with preexisting team connections — she has visited Liberty on multiple occasions and her coaches were familiar with the program.

"I played for the Hamilton Hawks organization last year, and my coach's daughter was on one of the very early teams at Liberty, so he has a very close relationship with the school," Innes said.

That same coach elected to hold his team's training camp at Liberty, singing the school's praises to Innes leading up to her initial visit. One day in, she was sold.

"I went there and thought, oh my goodness, this is amazing," Innes gushed. "It's so beautiful, and you get such a good feeling there. I was at training camp — and that was in August — and I was hooked. I was thinking, sign me up, I'll pay the tuition now!"

The bright laughter that followed is one of the top reasons Bloomfield is so pleased to have Innes representing the Lady Flames this fall. Certainly, her on-ice defensive skills will be valuable to the team — one-on-one and two-on-one situations, in particular, are where the Ontario native shines — but the intangibles Innes offers are perhaps even more impressive.

"She plays with a ton of heart," Bloomfield said. "Caroline is a very enthusiastic person and is always upbeat and committed. I see her blooming in her ability and personality here at Liberty… I look forward to her smile, work ethic, and desire, which will stimulate others around her."

While Innes focuses on strong, stay-at-home defense, fellow Ontario defenseman Alexopoulas is apt to get in on the action in the offensive zone.

"I'm a really offensive defenseman," she said. "I like to rush the puck a lot, and I have a good shot."

Bloomfield, too, cited Alexopoulas' "excellent" shot as a significant advantage for the Lady Flames, as well as her smarts and physicality on the ice.

"Alexis is a safe and solid player," Bloomfield said. "Because of her size and strength, she will protect our end well."

Height is on Wright's side as well. The 5-feet, 11-inch tall transfer from Prince Edward Island is expected to offer generous experience and strength to Liberty's defensive corps.

"She's tall and strong, with a great wrist and slap shot," Bloomfield said. "We have several strong but smaller players, and it is good to have her to (provide) balance. I feel she will be a very dependable and profitable player."

"She has good hockey sense and … will be very protective of our goalies and our net," he added.

At 5-feet, 10-inches tall, incoming net-minder Kelly shares that height advantage with players such as Wright and rising junior goalie Kristina Toppazzini, who's 5-9.

"Rosie is a tall goalie, and plays well in the net," Bloomfield said. "She is very much a team player, and her love of the game and commitment to improving is what drew me to her.

"She came to me very highly recommended by her coach," he added. "She knew several other girls that had visited Liberty and came to check it out for herself . She liked the campus and our arena, met the team and coaching staff, and decided it was a fit."

The coach praised Kelly's character and her above-and-beyond resolve to improve as much as any on-ice skill, and looks forward to watching her athletic journey throughout her collegiate career.

"Her quiet personality and love and respect for her team and the game is very evident," Bloomfield said.

All seven newcomers expect great things for the upcoming season, which starts Aug. 23 against the Hamilton Hawks at the LaHaye Ice Center before continuing with two more exhibition games Sept. 27-28 against the Washington Pride before the Lady Flames welcome the University of Massachusetts in a rematch of a 2-1 setback in the first round of last year's ACHA National Championships.

"I see the team heading for really great things," Innes said. "They've done fantastic the past few years, so I'm just hoping that I can help out and see them do as amazing as they have before."

"I'm really hoping to get that ACHA national title," Tipping added. "Hopefully, we'll win it all."